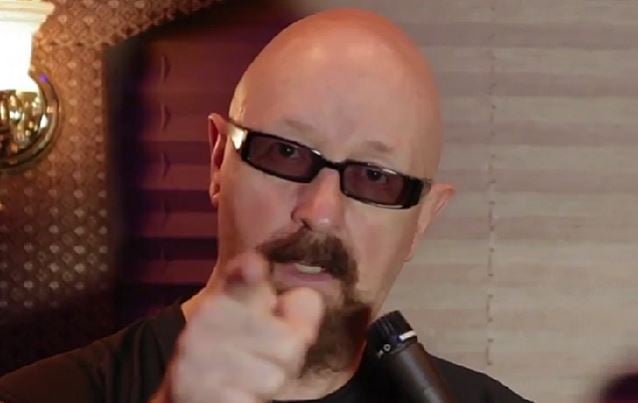 JUDAS PRIEST singer Rob Halford has commented on Kim Davis, the woman who refused to issue marriage licenses to same-sex couples in Kentucky, saying that we all should "give each other the respect and equality that everybody deserves on this planet."

Rowan County, Kentucky clerk Davis is an Apostolic Christian who has said her faith prevents her from issuing the licenses. She spent six days in jail earlier in the month for refusing to comply with a federal judge's order to issue marriage licenses to same-sex couples.

Davis has become a lightning rod for the same-sex marriage debate, her case prompting supporters to tie her defiance to follow the law to the passive resistance at the center of the Civil Rights Movement.

Halford, who came out as a gay man during a 1998 interview with MTV, says that the Davis case isn't actually about gay marriage or religious freedom but is rather is about the county clerk's refusal to uphold the law, as she was sworn to do.

Speaking to the C103 radio station, Halford said: "First of all, you know, it's been very interesting to watch all of that going on, 'cause I've been here in America while all that came about. And firstly, I just love freedom and democracy and freedom of speech and everybody being able to say what they feel. Having said that, when you are employed in a situation that comes with basic, accepted ground rules and you try to kind of manipulate them to your perception so that it interferes with your job and interferes with other people's lives, then I take [exception to that]."

He continued: "But, look, again, from my perspective 64 years later, living this long, it is just… It's simple, man: just give each other the respect and equality that everybody deserves on this planet, no matter where you're from. So all this business about gay, straight, bi, black, white, Jew, Catholic… it's all these ridiculous labels. We're all people. We all need to just try and find a way to love each other and accept each other and try and make the world a better place. Amen."

Halford told The Press Of Atlantic City that he expected metal fans to alienate him when he first spoke about his homosexuality. "I probably deluded myself into thinking I would get rejection," he said. "Nothing could have been further from the truth."