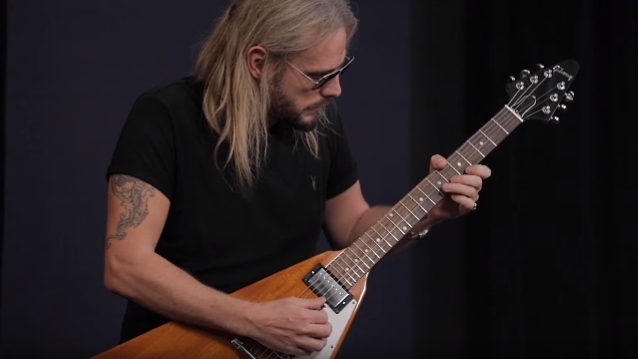 During a day off in Los Angeles on tour with JUDAS PRIEST, Richie Faulkner sat down with Gibson to discuss his early musical influences, his first performance with PRIEST and the brand new Flying V from Gibson's "Original Collection."

Introduced in 1958 and only made in limited quantities, the Gibson Flying V has taken flight over the years along with legions of followers.

A special set of calibrated Burstbucker 2 (neck) and Burstbucker 3 (bridge) pickups provide that perfect mix of volume, tone and power.

In a 2016 interview with 103GBF, JUDAS PRIEST singer Rob Halford stated about Faulkner: "We can't say enough about Richie. I mean, you know, it's hard to condense it, but if you [see PRIEST in concert] and just look at Richie's charisma and energy and all of the great stuff that's coming out of his hands, it's wonderful; it really is. And, yeah, I mean, he's infectious; the fans will tell you that. Once the show kicks off, he's at the edge of the stage connecting, and that's a really cool thing to be having happen with PRIEST."