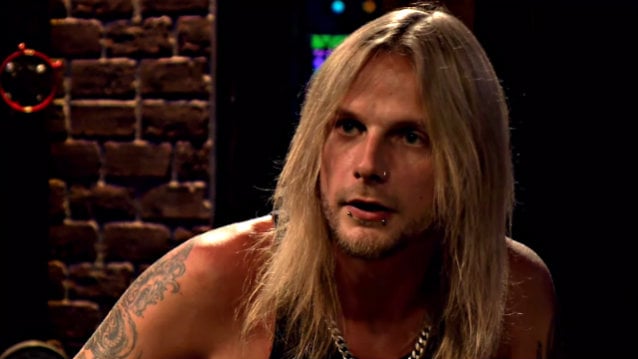 In a brand new interview with Glide Magazine, JUDAS PRIEST guitarist Richie Faulkner, who joined the band in 2011 as the replacement for K.K. Downing, was asked how he has been able to inject his personality into K.K.'s parts without changing them completely.

"It's always been a part of my playing," he said. "I used to play a lot of cover shows around London, and I still do sometimes when I get the chance; I'll go down and sit in and play some covers. And part of playing covers is you kind of half to be respectful to the parts that everyone knows and associates with the songs. So you have to be respectful of that but at the same time you improvise a bit, you put your own stamp on it, you try out different things and make it more exciting; all that sort of stuff. And I think because of that philosophy I've always had, and I think K.K. had the same thing. I think he comes from [Jimi] Hendrix, that kind of keeping certain motifs in there but also improvising and making it more exciting. I think that was always a part of his playing as well. So it's just a natural transition from one of my influences like him into what I do. That is the way I approach it really. There are certain things that I feel should stay, certain melodies and stuff that we all know. And there's a little bit of artistic license to go in there and do your own thing. And also the new ones, stuff that I've created, I'm going to do the same. There is stuff there that I'm going to do different live and I think it keeps it exciting for the musician and the audience as well. That's just part of my playing and I think I picked that up from him."

Faulkner also spoke about which was the most complicated PRIEST song for him to learn when he first came in. "I don't know if 'complicated' is the right word, but definitely 'Victim Of Changes'," he said. "It was a big song for my predecessor, K.K. Downing. It was one of his well-known solos. It was one of his moments in the set where he got his moment, you know. So you have to kind of pay respect to that and uphold that, and also doing your own thing. You just got to be respectful and do a duty to what went before. He was a big hero of mine and I am there upholding that responsibility. So from that point of view, it was a very focused moment and just upholding that and also putting my own stamp on there as well. But it's a joy to play those solos that came before and those parts that are part of my musical heritage, and also to create new ones now and go out and play those live. Some of the new ones are a ton more complicated to play because they are new and we have to work out what works best in a live scenario, so there is that dynamic as well. But it's all creative, it's all inspirational."