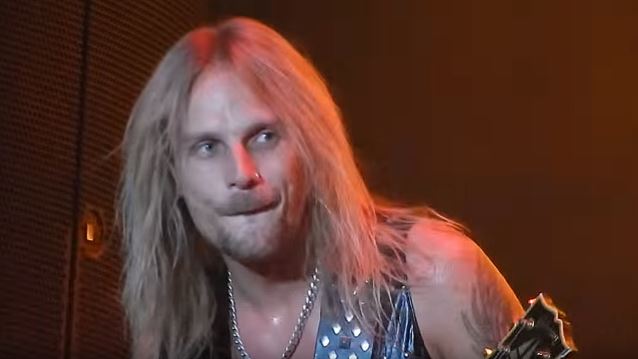 JUDAS PRIEST's RICHIE FAULKNER: 'It Will Be Exciting To Get Back Into The Studio Next Year'

In a brand new interview with Reverb, JUDAS PRIEST guitarit Richie Faulkner was asked if he had any news on a follow-up to last year's "Redeemer Of Souls" album. He said: "We're looking at maybe next year going into the studio again and putting down some ideas and seeing what we'll come up with.

"The first tour I did was the 'Epitaph' tour, and you can see why these guys have been doing it for 40 years. They love what they do, and it's inspiring."

Faulkner added: "A lot of people say to these guys, 'What's the secret of doing this music for 40 years?' You can see why this happens: because it inspires us."

Regarding how the new album will shape up stylistically, Richie said: "We don't know what direction it's going to take yet. Is it going to be a classic PRIEST record? Is it going to be a pioneering record, which PRIEST were famous for back in the day? They pushed the boundaries of heavy metal. That's why they're pioneers. We don't know. We've got to follow up the quality and standard of 'Redeemer Of Souls'. It will be exciting to get back into the studio next year and see what happens."