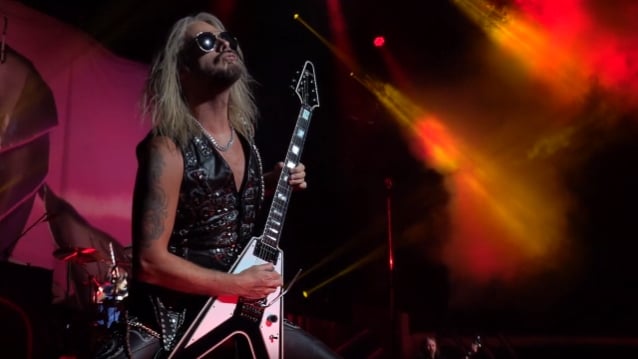 When a concert attendee pointed out on Twitter that Richie had just played with TOOL, Faulkner — who presently calls Nashville home — responded: "Was a pleasure and an honour to play for you guys"

In a separate tweet, Faulkner shared several photos of him with TOOL guitarist Adam Jones and wrote in an accompanying message: "Absolutely stunning show. Sonically, visually and technically blew me away. A big thanks to the band and crew for having me up for Jambi. Big love to Adam especially for his hospitality and stunning riffs"

Due to TOOL's strict anti-cell-phone policy at its shows, no video footage of Faulkner's jam with the band has yet emerged online.

TOOL was honored with a Grammy in the "Best Metal Performance" category in the pre-telecast ceremony at the 62nd annual Grammy Awards, which was held last Sunday night (January 26) at Staples Center in Los Angeles. TOOL was nominated for "7empest", a track from its 2019 album "Fear Inoculum".

On its current tour, TOOL has been playing two-and-a-half hour sets, with vocalist Maynard James Keenan spending the entirety avoiding the spotlight, singing mostly from the shadows, on a set of risers at the back of the stage.

It was me. Was a pleasure and an honour to play for you guys RHRF DOTF https://t.co/EUu5L2XsD0

With the master Adam Jones @adamjones_tv last night at the tool show.
Absolutely stunning show. Sonically, visually and technically blew me away. A big thanks to the band and crew for having me up for Jambi. Big love to Adam especially for his hospitality and stunning riffs pic.twitter.com/3lejiPH4TG