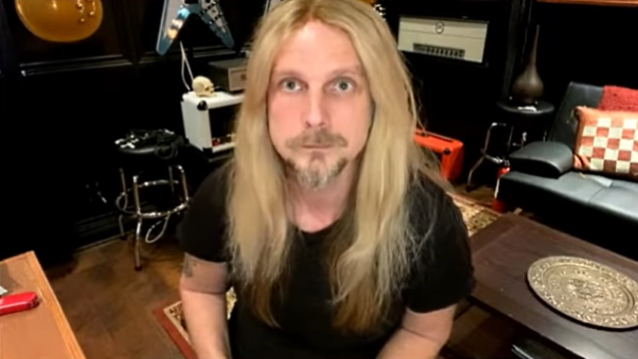 JUDAS PRIEST guitarist Richie Faulkner opened up about the life-saving surgery he underwent less than five months ago.

On September 26, 2021, the 42-year-old British-born musician suffered an acute cardiac aortic dissection during a performance at the Louder Than Life festival, just a short distance from Rudd Heart and Lung Center at UofL Health - Jewish Hospital in Louisville, Kentucky. It took the hospital's cardiothoracic surgery team, led by Dr. Siddharth Pahwa and also including Drs. Brian Ganzel and Mark Slaughter, approximately 10 hours to complete the surgery, an aortic valve and ascending aorta replacement with hemiarch replacement.

Faulkner, who has spent the last few months recovering at home in Nashville, reflected on the episode during an appearance on the "In The Trenches With Ryan Roxie" video podcast. He said (as transcribed by BLABBERMOUTH.NET): "Looking back, you can join the dots. I was tired that day. Tiredness is a sign of it. But that's the thing — three weeks into a tour, you're finding your legs anyway. We're getting used to the schedule. We're gonna be tired two or three weeks in. There was nothing that was out of the ordinary for that time in the tour schedule. So there was no signs whatsoever. I was just out there half way through [the PRIEST song] 'Painkiller' and my chest just went 'bang.' And I thought, 'Well, that doesn't happen every day.' And it didn't go away.

"Luckily, we usually have an hour-and-forty-[minutes] set. But tonight METALLICA were playing, so we had an hour set, and this was the last song," he continued. "If it wasn't, I would have carried on — a thousand percent, I would have carried on — keeled over and that would have been it. Because when these things go — I didn't know any of this beforehand — you have minutes. What happens is it ruptures and it bleeds into your chest cavity and you bleed out inside yourself and you go. That's it. So literally, it blew up inside. So I'm playing along, and I started to feel a bit faint. I remember walking back from the edge of the stage, just in case. I've never fainted, I've never passed out before, but I started thinking this is what it feels like. 'Cause obviously the blood was draining out of the extremities. So that's what was happening. Again, I didn't know this at the time. To be honest with you, I thought I was having a heart attack, because it was in the chest cavity and it was getting pretty painful. All my energy was depleted. At the end of the song, I usually lift the flying V up in the air, and I couldn't lift it — I had nothing. So I came offstage and sort of collapsed into a chair. The paramedics came out. And it went from there."

Faulkner went on to reiterate that he survived because he was close to a world-class heart center, and he was quick to recognize he needed help.

"I was still in my leathers in the ambulance," he continued. "I went back to the dressing room, got my jeans on, whatever, got to the hospital, they found out what it was, rushed me into the emergency room. They got me under. So they started to operate. They cut [my] ribcage open, and as soon as they did that, the whole thing ruptured. [Laughs] And I didn't know any of this. So my other half, she's out waiting for me, and the surgeon came out and told her, he said, 'You'd better call family to come and be with you because he's not gonna come out. He's not coming out.' And he told her why, that they'd just cut into me and the whole thing's gone.

Two weeks after his surgery, Faulkner told reporters that he experienced a sharp pain as he was stepping off the stage. "That's when it exploded," he said.