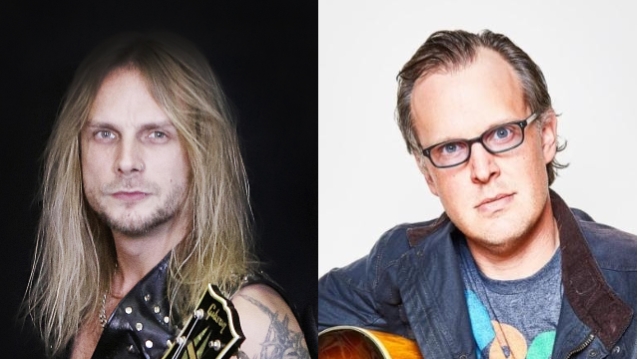 JUDAS PRIEST's Richie Faulkner says that his supposed Twitter "feud" with Joe Bonamassa was blown out of proportion.

Faulkner made headlines last month when he implored Bonamassa to "stop acting like a spoilt tit" after the blues/rock guitar titan complained about an online article based on one of his tweets.

The online exchange started when Bonamassa shared a brief video of him playing some shredding metal licks and riffs on an electric Steinberg six-string. This led to an Ultimate Guitar article headlined "Watch Joe Bonamassa Play Shred Metal on Unexpected Guitar," which received several comments from people criticizing Joe's performance. In response, Bonamassa posted a link to the story and included the following message: "What's going on fellas? Slow news day? I did this for fun and had fun doing it... now it's on your site to be rated by some bullshit number system. Next time.. promote an unknown player that could use the exposure."

A few hours after Joe's tweet made the rounds, Faulkner took to the social media platform to offer his two cents. "Calm down joe and stop acting like a spoilt tit," he wrote. "Everyone judges, good and bad and at the core of all this, it's just people giving their opinions on one of the greatest players on the planet today. Maybe the site also had fun doing what they do the same way you did. Lighten up"

Richie added: "You're right, think of all the guitar players that work for years and can only dream of ANY kind of exposure. You 'do something for fun' and it's seen thousands of times with a vast majority of positive comments and you slag it off. You're an inspiration. What's the issue?"

Faulkner spoke about his Twitter exchange with Bonamassa during a new interview with Tone-Talk. Asked if there was anything he wanted to say about the episode, Richie said: "It's one of those things where I think the Internet blows it out of proportion… I met Joe a couple of times. I've got no beef with Joe, and as I said in what I said to him, he's one of the best guitar players on the planet. I just thought he was overreacting, really, and I said that, and the Internet picked it up and went with it, which is fine. I don't think Joe took it any… Joe wasn't really offended by it, and he was also gentlemanly in his response. And we went back a few times on Twitter, which, incidentally, the Internet didn't publish. Like everything, they pick out certain things — they don't publish the whole thing — which is part of the world we live in."

Faulkner continued: "But there's no denying the fact, he's an incredible player; he's a phenomenon, really. Maybe I used words I shouldn't have used, but I used words like if I was talking to you guys. If we were talking over a few beers, I would have said the same thing. But, luckily, people got some entertainment for the day. We're guitar players. We create music. It's sad, really, when more emphasis is given on that sort of stuff than the music we create. Not in this case — obviously, he gets a lot of exposure anyway, which is rightly so."

In subsequent tweets, Joe denied that he was offended by people criticizing his performance. "I am long past caring about the comments about my playing from people on the internet," he wrote. "It's not gonna change anything about how I play nor my approach. I do care when a media outlet attempts to start a pile on at my expense. That I do not appreciate at all."

After one fan accused Ultimate Guitar of "pure laziness" for failing to "come up with some original content" instead of "swiping" Joe's video "to generate clicks," Bonamassa wrote: "It's not laziness... Thats just how it's done in the modern digital media business.. It's about clicks, comments good and bad and engagements. So, as long as they appear neutral they win with advertisers. But the protagonist is hung out to dry and they don't care."

Another fan agreed with Richie, saying that he didn't believe Ultimate Guitar shared Joe's video with the intent of generating a negative response and making Bonamassa look bad. Joe then replied: "Positive, negative who cares as long as you click through and see the advertising on the site. Being a principal player in a massive pile on a few years ago... I frankly don't trust their motives nor their intent. Just my oppinion."