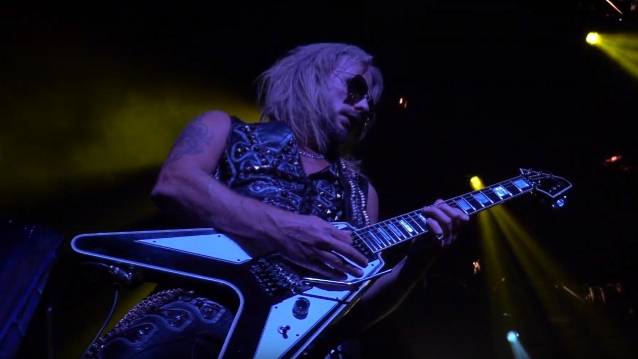 JUDAS PRIEST guitarist Richie Faulkner has uploaded an original riff that he wants his social media followers to record their own ideas to. You can check it out in the Twitter post below and download it at this location.

In a 2016 interview with 103GBF, JUDAS PRIEST singer Rob Halford stated about Faulkner: "We can't say enough about Richie. I mean, you know, it's hard to condense it, but if you [see PRIEST in concert] and just look at Richie's charisma and energy and all of the great stuff that's coming out of his hands, it's wonderful; it really is. And, yeah, I mean, he's infectious; the fans will tell you that. Once the show kicks off, he's at the edge of the stage connecting, and that's a really cool thing to be having happen with PRIEST."

This past October, it was announced that PRIEST is among the nominees for the Rock And Roll Hall Of Fame's class of 2020. The top vote-getters will be announced lter this month and inducted May 2 at a ceremony at Cleveland's Public Hall.

Having been eligible for induction since 1999, JUDAS PRIEST was on the ballot for 2018's class of the Rock And Roll Hall Of Fame, but was ultimately left out of the inductee list.

So here’s a fun experiment! I wanted to give you guys something that you can get involved with. Instead of posting a cover, here’s an original riff that I want you maniacs to get hold of, kick around and record your own ideas to. https://t.co/BPs2bX0CHcpic.twitter.com/2vhAe7rhcw