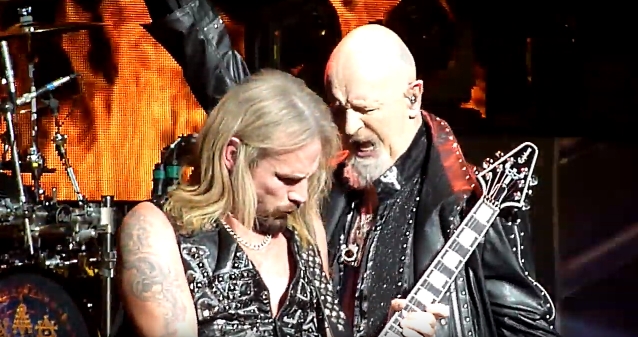 In a new interview with Nick Bowcott of Sweetwater, Rob Halford spoke about the fun visual interplay between him and the other members of JUDAS PRIEST during the band's live performances. He said (see video below): "I'm a bit of a taskmaster in that respect. You've probably seen me working with Richie [Faulkner, guitarist] — everybody to a great extent. But when Richie is coming up to do a lead break, I'll go and throw some shapes around him. We always [say to each other], 'What kind of shape are you gonna throw tonight?' 'Oh, I might do this and I might do that.' 'Well, you throw that shape, and I'll do this shape.' And that's cause we love throwing shapes. But I know that when I get over him or I'm throwing shapes, that's pushing him — I know I'm pushing him… It's not, like, 'Oh, God. The Metal God's pushing me.' It's not that. You're pushing each other. And I always go over to his side of the stage two or three times in a night and work with him. Or I do it with Scott [Travis, drummer], or recently with Andy [Sneap, touring guitarist]. You're working off each other's power and energy. You're supporting each other. You're pushing each other to get the maximum effect out of the moment. And you see a lot of bands doing that."

He continued: "I love that as a singer, 'cause I'm free… There's a lot of things that go on on that stage that you don't see if you're not really watching — winding people up. And that's just because you've gotta keep it loose."

Halford then clarified: "We take our work deadly, deadly serious in PRIEST, but we know that there's the balance between being deadly serious but at the same time living the joy of playing live together."

Rob is continuing to promote his recently released autobiography, "Confess". In the book, Halford discusses in detail what it was like becoming the first metal icon to announce he is gay in 1998 during an MTV interview, despite knowing about his sexuality since he was 10. Although his bandmates and their management knew he was gay and were accepting, he was advised to be discreet given the macho hetero nature of the metal world. He also opens up about surviving sexual abuse, as well as his struggles with depression, substance abuse, sobriety, and the suicide of one of his former partners. He also talks about how his own suicide attempt in 1986 led him to the rehab program that saved his life.

"Confess" arrived on September 29 via Hachette Books. It was written with Ian Gittins, co-writer of "The Heroin Diaries" by Nikki Sixx. In the book, Halford revealed that he knew he was gay during a time when gay men were "full-on persecuted" in his native United Kingdom. He came out to his parents three years later.