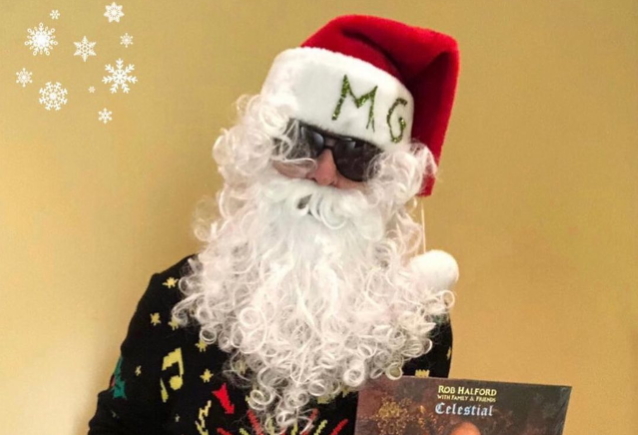 Regarding how he came to find himself covering such classics as "God Rest Ye Merry Gentlemen", "O Little Town of Bethlehem" and "Hark! the Herald Angels Sing", Halford told AZCentral.com: "In its simplest terms, we love music at Christmas. We always play music around that time of year. And we have the great standards to listen to and enjoy, from these great Christmas carols, some of them hundreds of years old, to more recent songs from various contemporary artists of all styles. But there's never really been that much in the metal scene, so to speak."

"The great thing about heavy metal is it's got these kinds of multiple dimensions," Halford explained. "I think when you look at it from an outside point of view — if you're not really familiar with the metal scene — it can look pretty intimidating. And it is a very strong, powerful experience. But it comes at different levels. I think the music that we've made on 'Celestial', for example, gives a display of that. Metal maniacs — as we call ourselves — are just as ready for the holidays as everybody else. And what we've tried to do with this music is to reach out to as many of those metal dimensions as we possibly can."

Last year, Halford told Revolver that making an album with his immediate family was "one of the most wonderful experiences" that he could have had as a musician. "It was a tremendous sense of adventure and a little bit of the unknown, which I think for a lot of musicians is generally the case," he said.

"So there was this sense of 'What's going to happen?' when the record was being created. The cool thing for me was that I was kind of out of the loop because I was busy working with PRIEST on the 'Firepower' record, so my brother and nephew, along with their friends on guitars, really put this record together by their own merit, by their own skills, and by their own professionalism. They would send me stuff along the way, and I'd be blown away with the demos! Like, 'Great guys, wonderful job. You don't need my fingers all over it.'

"So the whole experience was a very unusual one for me as a musician. The way I've generally made records — almost 50 years now —there was a whole different flavor and texture to making the music on 'Celestial'. The only thing that it had any connectivity to was the previous kind-of Christmas record I made called 'Winter Songs', and that was a decade ago. That was the only linkage there.

"All of this was just a wonderful adventure and the end result was nothing short of spectacular from my point of view. I couldn't have been happier when it was my turn to go in and do the vocals. Wonderful stuff, wonderful stuff."

"What's great about this season," Halford told AZCentral.com, "is that we tend to be more open than ever, more accepting and more welcoming to different experiences. That's just the nature of what the holiday season represents – a very loving, caring, sharing time of year. So there's an opportunity to spread some Christmas cheer from a different dimension in music."