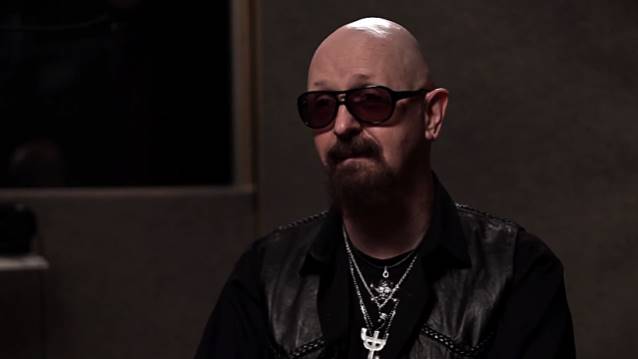 According to RollingStone.com, it was twenty-five years ago today that a judge ruled that British heavy metal legends JUDAS PRIEST were not liable for the deaths of two young men who cited the band's music as the reason they killed themselves.

Just before Christmas, 1985, 19-year-old James Vance watched his best friend Ray Belknap shoot himself to death with a .12 gauge shotgun in a churchyard outside Reno, Nevada. Then Vance pulled the trigger on himself. He survived but was severely disfigured. Vance later claimed his actions had been influenced by the heavy metal music of JUDAS PRIEST, prompting his family to sue the band.

At the heart of the lawsuit was the claim that JUDAS PRIEST's "Stained Class" album's songs contained messages that, when played backwards, said "try suicide" and "let's be dead." Lawyers said it was the song "Better By You, Better Than Me" with its subliminal command of "do it, do it, do it" that pushed the two men over the line to end their troubled lives.

Vance told attorneys that he and Belknap were listening to JUDAS PRIEST when "all of a sudden we got a suicide message, and we got tired of life." In a letter to Belknap's mother, he later wrote, "I believe that alcohol and heavy-metal music such as JUDAS PRIEST led us to be mesmerized."

"JUDAS PRIEST and CBS pander this stuff to alienated teenagers," the Belknaps' attorney argued. "The members of the chess club, the math and science majors don't listen to this stuff. It's the dropouts, the drug and alcohol abusers. So our argument is you have a duty to be more cautious when you're dealing with a population susceptible to this stuff."

Other lawsuits at that time sought damages because of violent lyrics in music, but the JUDAS PRIEST case was one of the first to claim that subliminal messages hidden behind those lyrics caused the deaths of young men.

JUDAS PRIEST singer Rob Halford took some time to reflect on what was a landmark case in recorded music in the following excerpt from RollingStone.com,:

"It feels like it was just yesterday, because it's such a strong memory. I remember walking up the steps every day at the courthouse in Reno, and feeling the incredible fan support that we had every day. All the local metalheads were there, chanting and holding up signs calling for us to be exonerated. And then there was just the tension and the sadness in the courthouse, because at the heart of the matter were these two guys that lost their lives tragically. These two boys were massive PRIEST fans, and that made it even more heart-wrenching that this terrible combination of the night and the drugs and the booze and their state of mind turned into something quite terrible.

"The case was very interesting, since it was about subliminal messages, plain and simple, and what they have the potential to do or not do. One of the first instances of the so-called 'backward masking' I'd heard of was in LED ZEPPELIN songs. But in that case, it wasn't subliminal, it was allegedly audible. And weren't THE BEATLES accused of doing something like that?

"Either way, my interpretation of subliminal messages as we presented it was how in the old days you'd go to a movie and someone would insert a frame of film that suggested you buy popcorn. But even then, it was real and it was physical, because you could take that frame and go, 'Look, there it is.' You can't do that with words, because you have to actually hear them. And then if you can hear them, then how can they be subliminal or subconscious, like in a dream?"