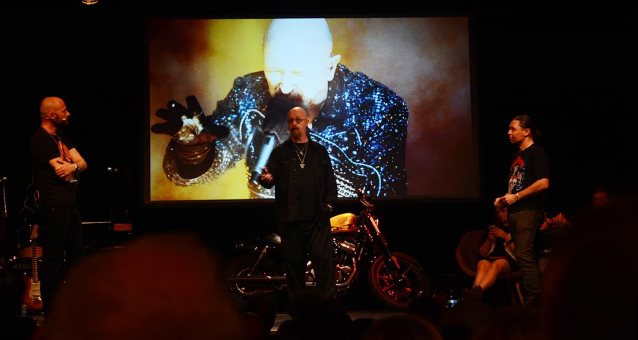 On May 24, JUDAS PRIEST frontman Rob Halford was one of the guest speakers at a business seminar in Sweden called "Världens Farligaste Möte" (English-language transation: The World's Most Dangerous Meeting). The event is a yearly e-commerce seminar in Gothenburg arranged by the company Star Republic, which has previously hosted such rock 'n' roll royalty speakers as Dee Snider (TWISTED SISTER) and Yngwie Malmsteen.

During the 45-minute question-and-answer session, Halford talked about what it was like making the first PRIEST albums, future plans, growing up in post-war Britain, his only jail incident in Arizona, how he started singing in the school choir, his grounded life off stage scrubbing toilets and his love for PRIEST fans all over the world.

After the Q&A, Rob took time out to pose for pictures with fans and event staff (as well as a lifesize copy of himself) and even made it up to the roller coaster ride "Helix".

The CEO of the surf brand About:Blank attended the seminar and said: "Rob was the coolest guy ever. He really took time out to take pictures with everybody, shook hands, said 'thank you' to everyone who came up and was extremely humble to everyone involved.

"For me, growing up with giant JUDAS PRIEST posters on the wall in the '80s, it was a dream come true getting to say hi to him. It was also really cool seeing him up at the roller coaster afterwards without any ego or bodyguards — just hanging out. The rock world needs more Rob Halfords." 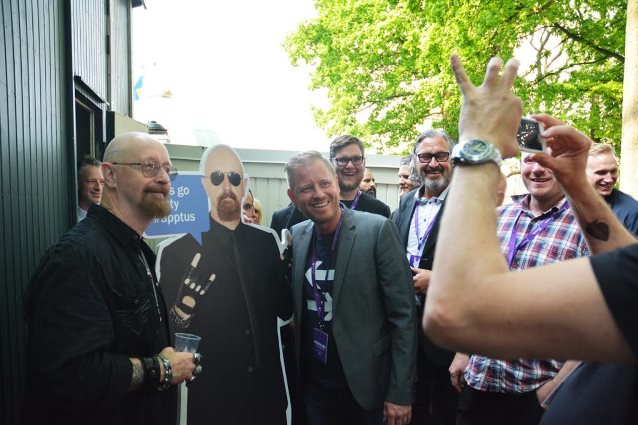