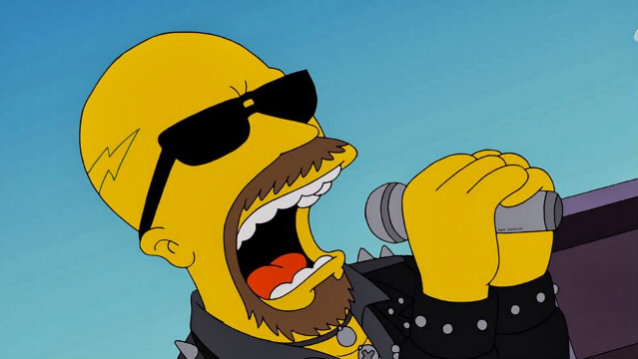 JUDAS PRIEST singer Rob Halford says that appearing on the animated TV program "The Simpsons" was "the biggest thrill" of his life and has commended the show's producers for indirectly apologizing to the band after the episode mistakenly referred to PRIEST as "death metal."

The cartoon's January 5, 2014 installment, titled "Steal This Episode", saw Homer getting involved in illegal film downloading, prompting the FBI to launch an anti-piracy investigation. When Homer's family sought refuge in a Swedish consulate, an overzealous FBI director in charge of anti-piracy subsequently went after him, and Halford wound up singing a parody of the band's classic "Breaking The Law" in an effort to nab Homer. "There's only one surefire way to get fugitives out of a foreign building," said the FBI agent. "Blasting death metal."

"Swedes love death metal," a headbanging consulate member said in the episode. "It reminds us of death!"

Speaking to Seattle's KISW radio station, Rob stated about the experience of being on "The Simpsons": "They invited me to a read-through, so I said, 'Yeah, I'll come and hang out.' So we're in a room, and they invite a lot of guests, and the writers are down at the other end with their notepads and watching everybody that's looking at the table. And then the producer goes, 'Welcome, everybody, to the read-through. Blah blah blah blah blah. 'The Simpsons' is the longest-running, most successful animated TV series ever.' He sets up the storyline, and he said, 'We open up with Homer talking about so-and-so.' And then Homer starts speaking, and Homer is about two feet to my left. And then Marge starts speaking, and then Bart starts speaking. It was, like, the most surreal thing ever, but the biggest thrill of my life, because I've been a 'Simpsons' fan since that show first kicked off."

He added: "It was very, very sweet. Some of the actors knew PRIEST and we shook hands and we took some pictures and so forth. That's another thing… With PRIEST, we're in that kind of… What's that thing called? The Seven Degrees Of Kevin Bacon? That's where we find ourselves now all of these years later. It seems like there's this great kind of seven degrees going on everywhere where PRIESThas touched somebody…. That sounds bizarre [referring to the 'priest touching somebody' comment]… PRIEST has reached out musically and we brought everybody into the PRIEST family."

After the original episode aired, much of the metal community showed its disapproval online, making it clear that JUDAS PRIEST is not, and never has been, a death metal band. Word evidently got back to "The Simpsons" creators, who made amends by having Bart scrawl the words "Judas Priest is not 'death metal'" repeatedly on the chalkboard in the introduction of a follow-up episode.

"What was really cool about that was that we didn't even think about the script side of the show," Rob told KISW. "And then, of course, when it was released, instantly, all of the fans were going on the PRIEST Facebook, [going], 'What are they saying? PRIEST aren't a death metal band. What are they talking about?' And then, like two episodes later, we see Bart making up and kind of doing that thing at the blackboard. They didn't need to do that. But that's what I love about 'The Simpsons' people. They're sooo protective of their brand and everything that's associated with it that that was a really, really beautiful gesture on their part to throw that back at PRIEST. Because we treasure everything about PRIEST… so they needn't have done that, but they did, and I though that was a really, really cool thing."