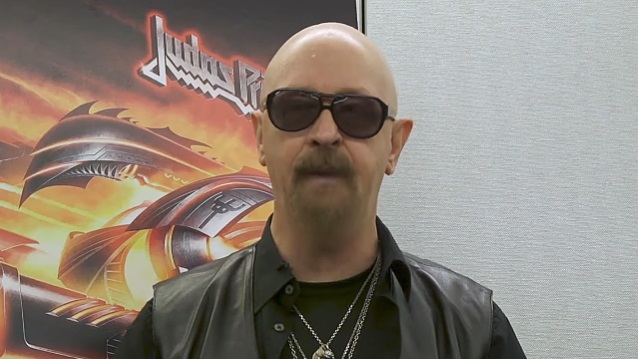 In a brand new interview with the Green Bay Press Gazette, JUDAS PRIEST frontman Rob Halford was asked what has been the "biggest storm" he has weathered in his life up until now. "My own personal alcohol and drug addiction, which stopped 32 years ago," he replied. "Music was incredibly important to me at that moment, and I fully understood the value of music as a form of support through those early days of not drinking and drugging. I listened to music more than ever at that point, and I was able to connect in a way that I hadn’t for as long as I could remember. The pureness of the music, the power of the music, therapeutically, in the way that it can heal you, was tremendously strong. That's part of the wonderful joy of listening to any kind of music. It really makes you feel good. Music is there to get you through life's ups and downs, good times and not-so-good times."

Halford celebrated the 32nd anniversary of his getting sober on January 6.

The singer told The Washington Times in a 2016 interview that he "would be dead" without his sobriety.

Even though most of the PRIEST fans drink, Halford told the "Rock N' Roll Breakfast Show" that they keep him sober. "That might sound crazy. But I have to go out there night after night and do my work in the way that's expected from me," he explained. "And I can't go out there drunk. I can't go out there smashed and drugged. That's cheating my fans. That's giving them a poorer display. So, if that makes sense, that's also part of my daily spiritual ritual — keeping clean and sober for my own well being, but also for my fans and everybody else."

Halford previously credited his belief in a higher power for helping him in his recovery. "When I got clean and sober, that was a major change in my life," he said during an appearance on HATEBREED frontman Jamey Jasta's official podcast, "The Jasta Show". "And part of my recovery is just having this higher-power belief. And it works. It works, man. It really, really is important."