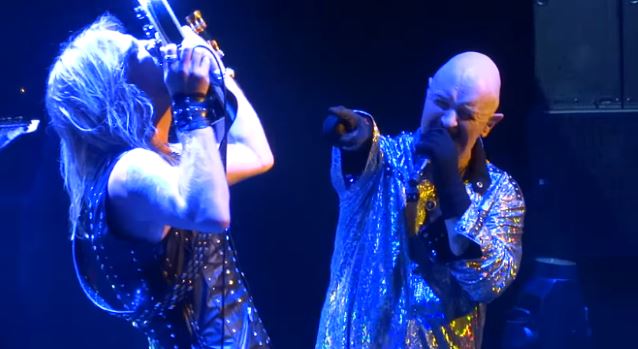 103GBF DJ Sandman recently conducted an interview with JUDAS PRIEST members Rob Halford (vocals) and Glenn Tipton (guitar). You can now listen to the chat below.

Speaking about the addition of guitarist Richie Faulkner to the JUDAS PRIEST ranks, Halford said: "We can't say enough about Richie. I mean, you know, it's hard to condense it, but if you look at [PRIEST's new concert DVD and Blu-ray] 'Battle Cry' now, if you put it on your laptop or your home theater or whatever and just look at Richie's charisma and energy and all of the great stuff that's coming out of his hands, it's wonderful; it really is. And, yeah, I mean, he's infectious; the fans will tell you that. Once the show kicks off, he's at the edge of the stage connecting, and that's a really cool thing to be having happen with PRIEST."

"Battle Cry" was released on March 25 via Epic Records. Recorded live on August 1, 2015 at Germany's Wacken Open Air festival in front of an audience of 85,000, the set is available on a 15-track CD, with the entire show on Blu-ray and DVD (running over 94 minutes),as well as digital audio and video formats. The DVD and Blu-ray also contains three bonus tracks shot in Poland on December 10, 2015 at The Ergo Arena, Gdansk, Poland.

JUDAS PRIEST's latest album, "Redeemer Of Souls", marks the band's first release with Faulkner, who was previously the guitarist in the backing group for Lauren Harris (daughter of IRON MAIDEN bassist Steve Harris).

Released in July 2014, the follow-up to 2008's double-disc concept album "Nostradamus" was billed as a return to JUDAS PRIEST's heavy-metal roots.