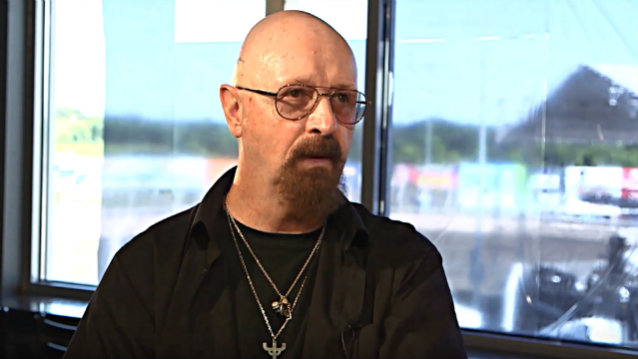 During a June 16 interview with the KBAD 94.5 FM radio station in Sioux Falls, South Dakota, JUDAS PRIEST frontman Rob Halford was asked what he thinks it will take for his band to finally be inducted into the Rock And Roll Hall Of Fame. "I don't know," he responded (see video below). We got a Grammy a few years ago, which was highly unexpected and a tremendous thrill. And the Rock And Roll Hall Of Fame, you know, is a controversial entity. It's not like the Baseball Hall Of Fame or the NFL Hall Of Fame. Those incredible institutions have very little kind of discourse going on in them, but because music — much like sports — is very passionate, and because I think the Rock And Roll Hall Of Fame has been getting more diverse now, which I think it should. You know, because a musician is a musician is a musician, and, again, if you've been able to make an indelible mark with what you do, to be recognized for that, I think, is a great honor. And if and when that day comes, I think that will be a real treat."

Speaking to Hour.ca in a 2010 interview, Halford was asked if he thinks the fact that PRIEST has thus far been snubbed by the Rock Hall has something to do with the fact that he is still one of the rare openly gay superstars in all of show business.

JUDAS PRIEST guitarist Glenn Tipton seemed to take a slightly more indifferent stance toward the idea of the band being inducted into the Rock Hall, telling Classic Rock Revisited a few years ago: "I don't know if we will ever be invited to the Rock And Roll Hall Of Fame or not. If we do, it will certainly be a privilege and it will be something we will be proud of. If we don't, then it is not going to change our lives. Our legacy is in our music. We will leave our music for everybody and I think that's good enough. You don't always need an accolade to leave a legacy."