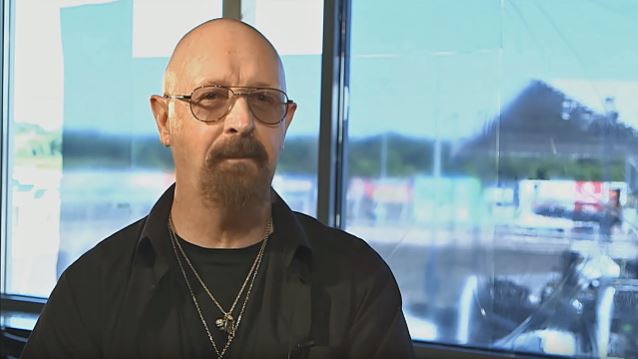 On Thursday, June 16, JUDAS PRIEST frontman Rob Halford was interviewed by the KBAD 94.5 FM radio station in Sioux Falls, South Dakota. You can now watch the chat below.

Speaking about PRIEST's plans for the immediate future, Halford said: "More metal. We're making another record right now, which should be ready when it's ready. But this'll be our umpteenth record, hundreds of metal songs later. We have a tremendous treasure trail behind us that we cherish, and we wanna make sure that what we put in front of that is equally worthy. So we take a lot of time in making the best music that we can. But it's exciting to think that not too far from now, there'll be another PRIEST record on the horizon with some more shows."

Halford will perform with HAIRBALL at Badlands Motor Speedway at "The Hair Ball" on Friday, June 17. He will bring his larger-than-life voice and persona to the first rock concert to be held at the newly renovated Badlands Motor Speedway in Brandon, South Dakota, all in support of a massive fundraiser for the Brennan Rock & Roll Academy.

In addition to Halford, "The Hair Ball" will feature several other superstar guests, including MÖTLEY CRÜE frontman Vince Neil.

HAIRBALL — billed as "A Bombastic Celebration of Arena Rock" — has firmly established its status as the top-drawing rock tribute show in the nation, featuring stunning recreations of rock's biggest superstars backed by world class musicians and enhanced by a massive stage show, huge pyrotechnics, video and special effects.

"This concert at Badlands Motor Speedway is going to be the biggest and best of everything that HAIRBALL is all about," claims HAIRBALL creator Mike "Chainsaw Caine" Findling. "We've been building up to this for 16 years, and to have the voice of JUDAS PRIEST, Rob Halford, join us for this event is a rock and roll dream come true."

Chuck Brennan, founder of the Brennan Rock & Roll Academy, echoes that enthusiasm. "We're in the business of making history in racing and entertainment," Brennan said. "Adding Rob Halford to this lineup makes this a truly historic occasion in every way. His support of the kids is incredible!" 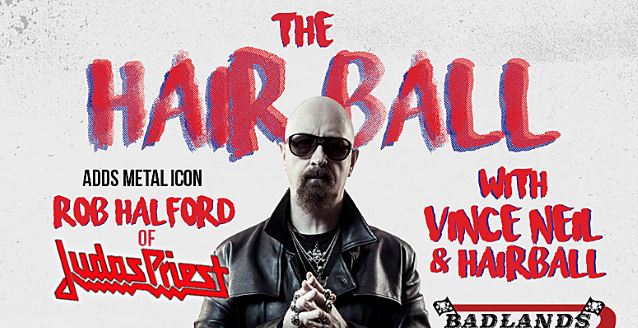