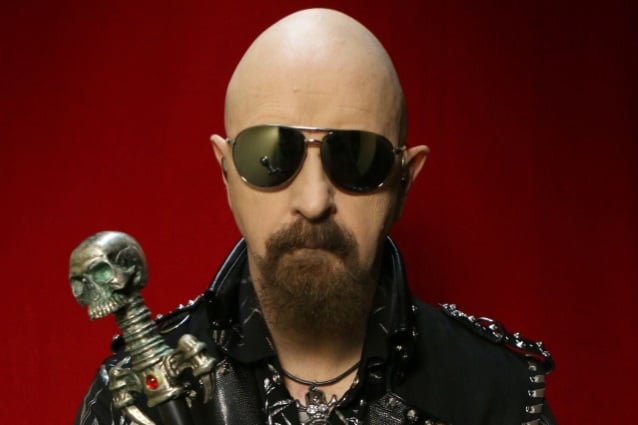 JUDAS PRIEST's ROB HALFORD: 'We're Still Driven By The Power And The Passion Of Metal'

On February 21, JUDAS PRIEST frontman Rob Halford was interviewed by "Lamont & Tonelli" of San Francisco radio station 107.7 The Bone. You can now listen to the chat using the Audioboom widget below.

Asked what his secret is to still singing great more four decades after joining PRIEST, Rob said: "My secret on this particular record [the upcoming 'Firepower'] is the amazing production team of the mighty Colonel Tom Allom, who was with us again for the first time in a long time, actually, at the desk. And by his side Andy Sneap, who was… actually, thinking of Andy, I'm thinking of the Bay Area, I'm thinking of TESTAMENT and all of the other great [bands] that he's worked with from the Bay Area. He's just got this amazing ability to put me in a headlock and go, 'You didn't do that right. Do it again.'"

He continued: "If this isn't the epitome and the embodiment of all things metal, I don't know what is, because we had a blast. This is our 18th studio album, and we're still driven by the power and the passion of metal. We're thinking about our fans every step of the way, we're thinking about you guys. Everybody's involved in this great celebration that we're about to launch with 'Firepower' very soon."

JUDAS PRIEST guitarist Glenn Tipton announced last week that he will be sitting out the band's touring activities as a result of his battle with Parkinson's disease, with which he was diagnosed a decade ago.

Tipton, who is now 70 and has performed on every PRIEST album since the band's 1974's debut set, "Rocka Rolla", is not quitting the band, but simply cannot handle the rigorous challenges of performing live. Joining PRIEST for its upcoming dates will be Sneap, a former member of SABBAT who has most recently played with HELL.