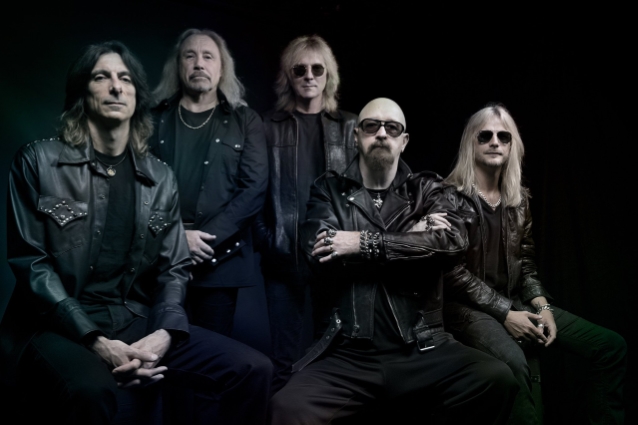 JUDAS PRIEST's ROB HALFORD: 'We've Got An Enormous Amount Of Material Stacked Up' For Next Studio Album

JUDAS PRIEST members Rob Halford (vocals),Scott Travis (drums) and Richie Faulkner (guitar) spoke to Metal Hammer magazine about the progress of the songwriting sessions for the band's follow-up to "Firepower" album. Released in March 2018, "Firepower" was the second LP to feature Faulkner, who was selected to fill the void left by founding guitarist K.K. Downing following his exit in 2011.

"We started the year prepping the next JUDAS PRIEST metal masterpiece," Rob said. "We had one massive writing session together and we've got an enormous amount of material stacked up, which is really thrilling after the glorious response we had to 'Firepower'."

"It's gonna be good," added Travis. "Rob's always excited about new music, which is great, because he's such a creative guy and when you are that creative, naturally you never rest on your laurels. You always want to do something new and get it out there."

Faulkner talked in more detail about PRIEST's songwriting process, saying: "We compile all our ideas and get together and throw them in the pot and see what sticks, then see what lights up the room, see what Rob grabs hold of. It might be a riff that Rob really gets his teeth into that inspires a lyric or an intro, verse or chorus and suddenly you've got the nucleus of a song."

Last month, Faulkner told SiriusXM's "Trunk Nation With Eddie Trunk" that the creative process for PRIEST's next LP was halted by the coronavirus outbreak, which disrupted global travel.

"We started on the new record earlier in the year — me, Glenn [Tipton, guitar] and Rob — and we all went home for the summer," Richie said. "We were all gonna reconvene later on. 'Cause we really wanna get back together and do it all together — that's the way the magic happened on 'Firepower' — and we just haven't had the chance to be able to do that. But as soon as we can, and as soon as we get back to some sort of normality, we'll get back in the studio and continue with it."