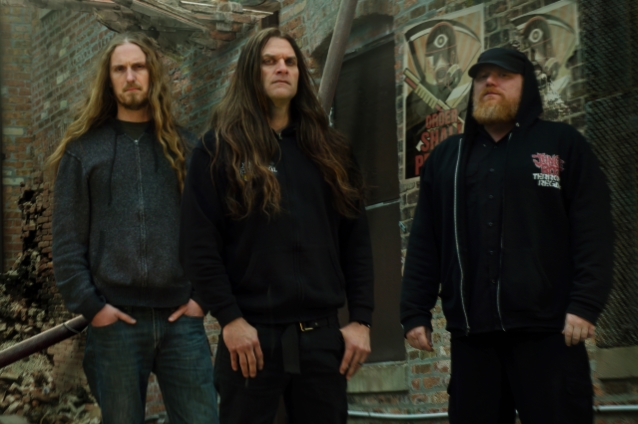 Midwest death metal titans JUNGLE ROT have released the official music video for the song "A Burning Cinder". The track is taken from the band's self-titled album, which was released in July via Victory Records.

JUNGLE ROT vocalist/guitarist Dave Matrise states: "I call this a 'Frankenstein' creation; it has all the elements needed for a good metal song — groove, thrash, speed and killer lyrics. It is one of my favorites in our catalog and I wanted to expand about the government trying to control, manipulate and force feed citizens into what we should believe in or not. It goes over really well live and we can't wait to continue playing it on the next tour."

JUNGLE ROT recently announced the "Send Forth Oblivion Tour Part 1", its first European tour in five years. Matrise says: "I'm very excited to get back to Europe and play our style of old-school metal to all the headbangers around. We will also come back in the summer for the 'Send Forth Oblivion Tour Part 2' with more dates, mostly on the festival circuit. 2019 is going to be a hell of a year. Let's get crushing!"

"Jungle Rot" blasts off with "Send Forth Oblivion", an audible equivalent to stainless steel medical devices in your eardrum. The album closes with a crushing cover of KREATOR's 1987 classic "Terrible Certainty".