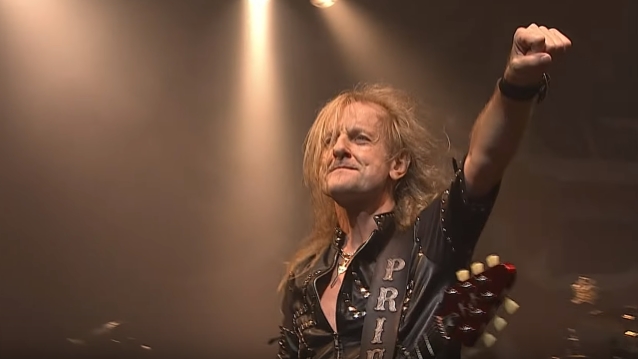 K.K. DOWNING Looks Back On JUDAS PRIEST's Contentious Rivalry With IRON MAIDEN: 'It Got A Bit Ugly'

During a brand new interview with SiriusXM's Eddie Trunk, former JUDAS PRIEST guitarist Ken "K.K." Downing spoke about the contentious rivalry that developed between PRIEST and IRON MAIDEN when the two bands toured together in the early 1980s. "We'd just finished the 'British Steel' record in England, and we were going out on tour [in early 1980 with IRON MAIDEN]," he recalled. "And then the next thing I know, I read in a music paper that [IRON MAIDEN said] something like, 'Yeah, we're gonna blow the bollocks off PRIEST,' or something like that. And I went, 'What the hell is this shit?' We were still in the recording studio, tidying up the last mixes or something. And I said, 'Well, who are these guys?' Why should we have [them] on tour if they're gonna create this type of vibe before we've even met them, let alone done a show together?' I said, 'Let's get rid of them and get somebody that really appreciates the gig' [laughs], of which there would have been an awful lot of bands. But anyway, everybody talked me into going with it, and I said, 'Well, fine,' obviously being democratic. And the next thing I know, we were at the rehearsals at some theater in London somewhere, and this bunch of guys walked in and just sat down in front of me. And I said to my guitar tech, 'Who are those dudes there?' [Laughs] And he went, 'Oh, that's the support band.' And I said, 'Well, who the hell invited them into our rehearsal?' I was thinking about what I read in the papers. And I said, 'Well, just go and tell them that they weren't invited and they need to leave.' I didn't see an invite; nobody told me they were coming in — when you're trying to work out songs and this and that and the other. So that's what happened."

In his autobiography, Di'Anno claimed that he was the main reason old feelings of rivalry existed between MAIDEN and PRIEST during the early 1980s — something that Downing later denied. "Paul apologized personally to me — what a great gesture," K.K. told Rock Hard magazine in a 2003 interview. "But he wasn't the main reason for the rivalry. At the time of 'British Steel', PRIEST was the bigger band and MAIDEN was the supporting act. They were saying that they [would] blow us off the stage without any problem — well, I thought their behavior wasn't very nice. I'd have loved to send them home to take another band with us, [one] who would have appreciated the chance. But we were told not to do it as it would have looked like we were frightened by them. So we kept on going... but they were very arrogant. And I remember the main rehearsal before the tour when there were a few guys hanging around in the room who didn't say a word and watched everything we did — every step we made and every move of the stage lights. I wasn't very pleased and asked the guitar tech to tell the guys to leave the place. Don't get me wrong: I'm not too good not to play in front of the supporting band — but they could have asked, at least, if it was okay to attend the rehearsal. We went on tour and they didn't blow us off the stage, of course. I watched quite a lot of the MAIDEN shows, but the reaction of the audience wasn't very explosive — because the fans were waiting for us. Okay, MAIDEN became one of the biggest bands of the metal scene — and I'm proud of them. We made a big mistake by focusing more on the U.S. than on Europe after releasing 'British Steel'. [I mean], we lost a lot of attention at home. In the U.S., we were quite big — and MAIDEN asked us for a support slot on our U.S. tour. We said yes — and the same old story happened again. It had a lot to do with rivalry and jealousy."

When asked what he would say to MAIDEN mainman Steve Harris if they bumped into each other, K.K. told Rock Hard: "I'd buy him a beer — because it's an old story. Like I already said, I'm proud of what MAIDEN achieved and of what they did for the British metal. It might sound stupid — but it's true."