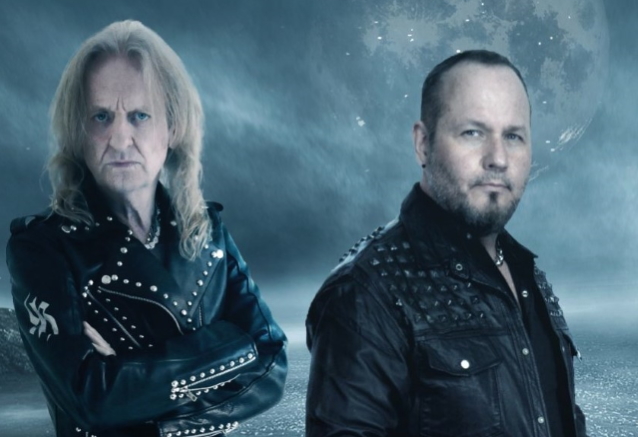 K.K. Downing says that he feels very strongly about making sure the Tim "Ripper" Owens-era JUDAS PRIEST albums are available to the public.

Asked by Jamey Jasta of "The Jasta Show" who owns the rights to LPs Owens made with PRIEST, Downing said (as transcribed by BLABBERMOUTH.NET): "It's a good question. CMC [International Records, which released 'Jugulator' in the USA] and the guys that were the labels are defunct now, so the rights to the albums reverted back to us, JUDAS PRIEST."

When Jasta pressed Downing about the fact that he owns partial rights to "Jugulator" and "Demolition", K.K. said: "I'm a 25 percent shareholder [in Judas Priest Music Limited] but I don't have a say in what goes on. I was a director until year and they kicked me off the board because there's three of them and one of me, which is a bit mean.

"But, yeah, I would fight for the right every day to have those albums [available], 'cause I'm a part of them," he continued. "And so the ongoing fight to have those albums in a public domain is something I feel very, very strong about, and obviously Ripper does, and everybody should that played on those records.

"Why would you denounce albums that you spent years working on or were a part of?" Downing added. "It doesn't make any sense."

Last year, Downing discussed Owens's time with PRIEST during an interview with Rodrigo Altaf of Sonic Perspectives. After Rodrigo noted that "Jugulator" and "Demolition" were "unfairly" criticized upon their original release, K.K. said: "I think lots of bands release things either too late or too early. Timing is very, very important, and maybe the timing wasn't quite right. But it was a big thing, obviously, for Ripper to step into. It wasn't so much that Ripper was there; it was the fact that Halford wasn't there, I think. It was the familiarity of the voice, which I know and I understand. But Rob left and formed three bands — not one, not two but three. And playing PRIEST songs as well. But, yeah, I think things have turned around now and fans revisit [those albums]. Yeah, there's a lot of guitar parts on those [records] — apart from the vocals — a lot of guitar riffs and a lot of guitar work, which, obviously, we're immensely proud of."

A couple of years ago, Tim said that he was a little miffed by the fact that fans cannot find the music that he made with PRIEST on any of the music-streaming services or other online retailers. "My issue is I would like to buy the records," he said. "I'd like to buy some to even sell when I'm touring solo, but you can't when they're kind of gone. And that's only the thing I talk about… If they were out there, I could maybe buy 'em at cost and sell 'em at my concerts. That would be kind of cool. Then I'd have my whole catalog."

PRIEST bassist Ian Hill concurred, saying in a separate interview: "There's some good material on both of those albums. And Ripper is a terrific vocalist, and he did a tremendous job on 'Jugulator' and 'Demolition' .And why they're not for sale has got nothing to do with us — put it like that. Whether it's a contractual thing between Sony and whoever owns the copyrights to those albums, I don't know. But it is a shame, because there's some good material there. And as a band, it's still JUDAS PRIEST. I know it wasn't the trademark lineup, but it was still JUDAS PRIEST nonetheless. So, it's disappointing — if that's true that the material is not available. It really is."

Downing and Owens are reunited in a new band called KK'S PRIEST in which they are joined by guitarist A.J. Mills (HOSTILE),bassist Tony Newton (VOODOO SIX) and drummer Sean Elg (DEATHRIDERS, CAGE).