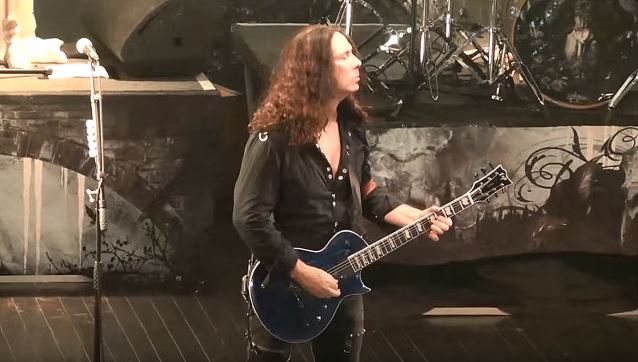 The Great Metal Debate conducted an interview with KAMELOT guitarist Thomas Youngblood before the band's November 15 concert in Louisville, Kentucky. You can now listen to the chat below. A couple of excerpts follow (transcribed by BLABBERMOUTH.NET).

On the songwriting process on KAMELOT's latest album, "Haven", compared to the making of 2012's "Silverthorn":

"'Silverthorn' was the crucial first album with the new lineup, so we didn't want to mess around too much with the chemistry or the songwriting style. I think with 'Haven', we were able to kind of open that up a little more and give Tommy [Karevik, vocals] a little bit more personality into what he normally does. And I think it's a good template of what we can expect for the future records."

"It's been good. I like it where I'm able to communicate directly with the heads of the label, whether it be the new CEO over in Austria or the guy that works here in New York. And that kind of direct contact is really important for me, because I like to have instant feedback when it comes to certain things. So, yeah, it's been great so far. We're ahead, I think, of what we projected for 'Haven' in terms of sales. We're hoping to also do a couple of more videos. We've already done two videos, and we're looking at hopefully doing at least two more. So it's also a cool thing that a lot of bands don't get to do, which we're fortunate. And that was part of… When we decided to go with them, we had some other labels involved with negotiations and stuff, and they really showed the most initiative to sign the band."

On KAMELOT's plans for the follow-up to "Haven":

"In terms of the next record, we're not even thinking about that right now. We have all of next year to tour. We're actually gonna do South America, Asia… go back and do Europe in April… Summer festivals next year. And then probably after the summer, we'll start working on new songs. So we're looking at another year and a half minimum for the next record. But we have a lot more places to tour, and we have more videos coming out to keep promoting the album. The album just came out in May, but it seems like it's been a year already. And I think one of the things that's even more exciting is when we start thinking about the next record, we already have a lot of cool ideas that we're gonna pack into it. But for now, it's all 'Haven' on the brain right now."

The CD was made available on May 5 in North America and May 8 in the rest of the world (excluding Asia) via Napalm Records as part of an exclusive licensing deal through the band's Kamelot Music LLC.