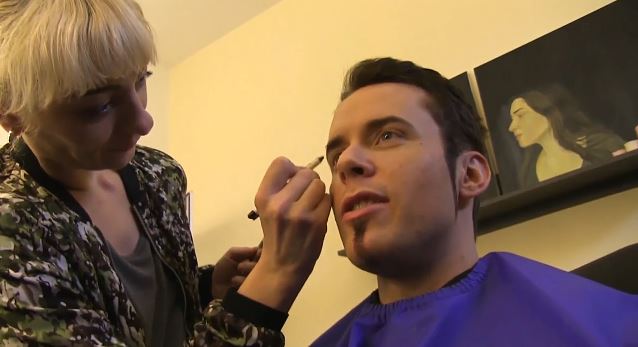 Behind-the-scenes footage from the making of "Insomnia", the new video from American/German/Swedish symphonic metallers KAMELOT, can be seen below. The clip was filmed in Belgrade, Serbia with director Ivan Colic, who has previously worked with MOONSPELL, SOILWORK, HAMMERFALL, TYPE O NEGATIVE and SYMPHONY X.

"Insomnia" is taken from KAMELOT's new album, "Haven", which sold around 7,600 copies in the United States in its first week of release to land at position No. 75 on The Billboard 200 chart. This mark's the biggest first week in the U.S. in KAMELOT's history.

"Haven" was made available on May 5 in North America and May 8 in the rest of the world (excluding Asia) via Napalm Records as part of an exclusive licensing deal through the band's Kamelot Music LLC.

Speaking to RAMzine at this year's Hammerfest, which took place last month at Hafan Y Mor Holiday Park, Pwllheli , Gwynedd, North Wales, KAMELOT singer Tommy Karevik stated about "Haven": "I think it's even more diverse than the previous album [2012's 'Silverthorn']; it is, actually, more diverse. We went a little bit for that — to have this wide spectrum of different feels; not only bombastic stuff, but also melancholic, dark, slower stuff, even faster stuff, more aggressive stuff. So it's a really good… It's like a plethora of everything, which is really cool. We've got some really cool responses from the album so far."