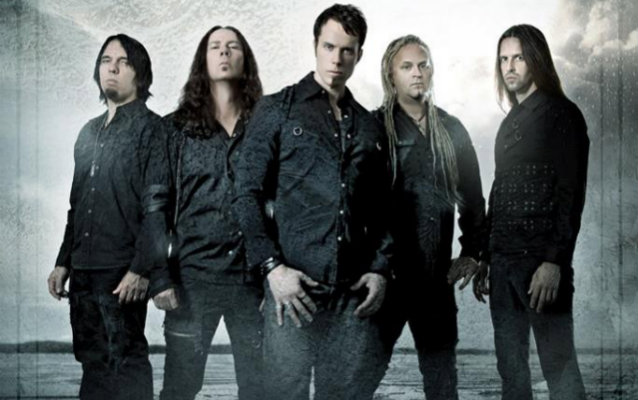 KAMELOT Putting The Finishing Touches On Songwriting For Next Album

Guitarist Thomas Youngblood and keyboardist Oliver Palotai of American / German / Swedish symphonic metallers KAMELOT are in the Stuttgart area of Germany this week "working on the final parts of the next KAMELOT album," according to Youngblood. He adds: "It's going great and we have lots of music and ideas in store."

KAMELOT's follow-up to 2012's "Silverthorn" is tentatively due next spring via an as-yet-undetermined record label.

Palotai sat out the band's North American tour last year so he could stay home with longtime girlfriend Simone Simons, (EPICA singer) as they awaited the birth of their first child. Filling in for him was Coen Janssen of EPICA.

"Silverthorn" sold 5,400 copies in the United States in its first week of release to land at position No. 79 on The Billboard 200 chart. The band's previous CD, "Poetry For The Poisoned", opened with around 6,100 units in September 2010 to enter the chart at No. 74.

"Silverthorn" was released on October 30, 2012 in North America, October 26, 2012 in Germany and October 29, 2012 in the rest of Europe via Steamhammer/SPV. The CD marked the band's first release with Tommy Karevik, the Swedish vocalist who previously fronted SEVENTH WONDER (a group that he is still a member of).

In a 2012 interview with Loudwire, Thomas Youngblood stated about what Karevik brings to the band: "I think when we knew we had to bring in a new person on vocals, we wanted the opportunity to grow the band, not just to maintain the band or survive. We wanted to look at this as an opportunity to make the band bigger, [and] I think with Tommy we can do that. Not only is he an exceptional singer, he's a great songwriter and he's way ahead of what I thought he would be in terms of being a frontman. People who come out to shows will see that this guy is a force to be reckoned with. I can't imagine a better choice, honestly. In the beginning, when this whole thing started, we were a little unsure of what the future might be, but now we're really excited about it."