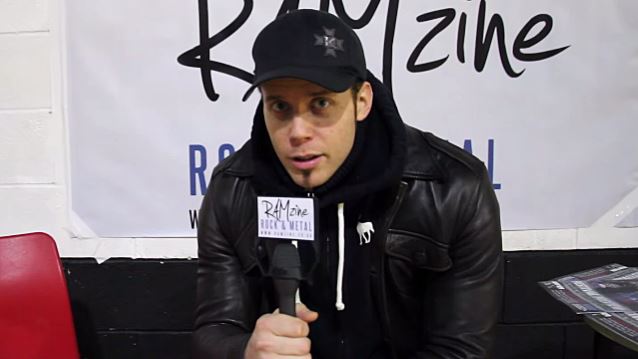 RAMzine conducted an interview with Tommy Karevik, the Swedish vocalist who has been fronting KAMELOT since 2012, at this year's Hammerfest, which took place earlier this month at Hafan Y Mor Holiday Park, Pwllheli , Gwynedd, North Wales. You can now watch the chat below. A few excerpts follow (transcribed by BLABBERMOUTH.NET).

"I think it's even more diverse than the previous album [2012's 'Silverthorn']; it is, actually, more diverse. We went a little bit for that — to have this wide spectrum of different feels; not only bombastic stuff, but also melancholic, dark, slower stuff, even faster stuff, more aggressive stuff. So it's a really good… It's like a plethora of everything, which is really cool. We've got some really cool responses from the album so far."

On whether "Haven" has a lyrical theme:

"At first, we didn't go for some kind of theme; it just happened, in a way, when we started writing and started looking at what we had, gathering the lyrics together and everything. Everything just fell into one basket, so to speak. Actually, it's about… It's not a theme like 'Silverthorn' was; it's a more loosely based theme, but it's about this topic… the world. We're a little bit reflecting on what we are doing in this world right now. Everyone's looking down at their phones and doing social media instead of talking to each other, and everyone's hunting for this perfect life, this perfection. And everything you post is about how good, perfect you are… everything. You don't get reality, actually. You get a fake picture of reality, which doesn't… People just feel bad and get stressed over it and stuff like that. So that's one thing of it; the overall stress of today. But that also translated into a little bit of a futuristic feel, you know. So I'm pretty happy with everything so far, and I just hope that people are gonna love it as much as we do."

On how long it took to create "Haven":

"I cannot really say how long does it take to record, because it's also… it's a creative work — you write as you go, and you redo stuff. But the whole process has taken a year. But then, of course, for me, it hasn't taken a year; it has taken six months, because the music also takes time to create."

On how his songwriting process works:

"Sometimes I create the melodies first, and I write the lyrics to that, when you have the phrasing and everything. But most of the time, it's just melodies and words fit together already from the beginning."

"Haven" will be released worldwide (excluding Asia) via Napalm Records as part of an exclusive licensing deal through the band's Kamelot Music LLC. The CD will be made available on May 5 in North America and May 8 in the rest of the world.