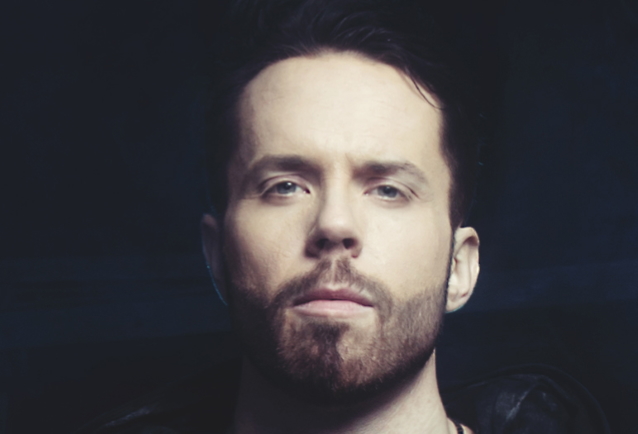 KAMELOT's TOMMY KAREVIK On Replacing ROY KHAN: 'In Hindsight, It Couldn't Have Gone Any Better'

KAMELOT's Tommy Karevik spoke to #MetalTalk about what it was like to replace Roy Khan nearly a decade ago. The Swedish singer has appared on the band's last three studio albums, 2012's "Silverthorn", 2015's "Haven" and 2018's "The Shadow Theory".

"I never thought about it as, 'I'm gonna replace someone,' to be honest," Tommy said (see video below). "I thought about it as I wanna honor the legacy that was already there but bring something new into the fold as well. I thought of it as a huge challenge, of course. But my view on it was never, 'I'm gonna go in and replace this guy,' because I know he was loved, and he is still loved, in the metal community, and he will always be loved because of his talent and what he brought to the table with [Roy's pre-KAMELOT band] CONCEPTION and KAMELOT. I never thought that that was my job to go in and replace him. I just wanted to take on what he had going for the band and just bring me — my personality and my energy.

"In many ways, it's a different band," he continued. "It's a little bit of a different energy now. But still, people have all these albums that they can listen to from the beginning, and they have new albums, and they will continue to have new albums with great songs. That's kind of my take on it."

Karevik also talked about the KAMELOT fans' response to his addition to the band. "I have to say, it's never an easy thing, especially coming in after someone that was so renowned," he said. "Thinking back, in hindsight, it couldn't have gone any better, to be honest. I'm so happy that the fans were so accepting and really welcomed me with open arms. So I have only positive things to say about that. I thought it was gonna be more stressful, with the metal community often maybe living in the past a little bit, here and there.

"If I think about my favorite albums, for example, of my favorite bands, I also live in the past," he admitted. "Let's just be real — I glorify some of the stuff in the past. And I think, 'Ah, it's never gonna be the same again.'

"If my favorite band had to replace its singer, I don't know what I would do. So I come from the same thought. So that's why I'm so happy that everyone, or most of the people, were so welcoming."

After his departure from KAMELOT, Khan, who is a devout Christian, joined a church in the coastal town of Moss, Norway. He has since reformed his pre-KAMELOT band CONCEPTION and released an EP, 2018's "My Dark Symphony", and a full-length album, 2020's "State Of Deception".

In a 2018 interview with Italy's SpazioRock, Roy called leaving KAMELOT "the best decision I have ever made" and praised Karevik, saying he "really" liked some of KAMELOT's newer material with Tommy on vocals. "Sounds classical KAMELOT in my ears, and Tommy is a great singer," Roy said.

Karevik currenty resides in Calgary, Alberta, Canada with his wife, KOBRA AND THE LOTUS lead vocalist and songwriter Kobra Paige.

Karevik and Paige got engaged in June 2019 when he popped the question in his former hometown of Stockholm, Sweden.

Tommy and Paige apparently met when KOBRA AND THE LOTUS supported KAMELOT on a European tour in 2015. Since then, Kobra has frequently appeared as a guest vocalist at KAMELOT shows.