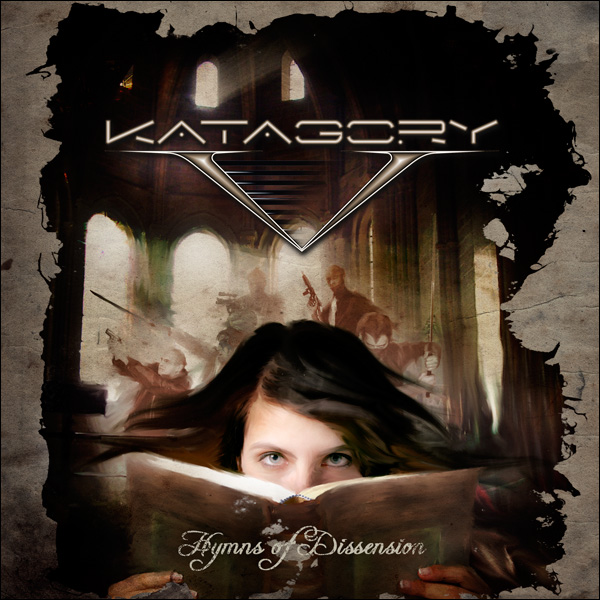 Utah-based progressive/power metallers KATAGORY V has posted the cover artwork for their fourth album, "Hymns of Dissension", due later in the year.

Commented bassist and founder Dustin Mitchell: "The new album is complete and the final mix has been sent off to the record labels, so now it is in their hands, and we all get to wait just a few more months for the final product. At this point, everyone in the band is happy with the end results, and with hearing the final mixes, in my opinion, it's going to be fairly colorful in musical styles, and maybe even a bit more retro-metal sounding compared to the previous album. We once again ran into a few bumps toward the end, and basically slid into home base with our deadlines. Once again that black cloud was looming over our band, and we had another computer in the studio freeze up and die, a different one, but the most crucial one needed, and it happened at the tail end of mixing. It was touch-and-go for a while; fortunately, we were able to resurrect it after a few days of trial and error, just in time to get the album done. And the problem? Dust and dirt, that's it! Once we did everything possible externally and were ready to give up and take it to a technician to retrieve the songs off the hard drive, we then blew the computer out with compressed air, which exploded out of that thing like a car spinning out on a gravel road. We gave it one more shot, booted it up, and the damn thing buzzed and hummed back to life. I'm not the most tech-oriented guy on the block, but I guess you have to give those things a bath sometimes? How quaint. It's a good thing we got it working, or the end results of getting the album done on time, or even at all, would have been extreme. In cases like this, it makes me miss the days of analog and reel-to-reel recording! So, to commemorate the completion of the album, we have decided to release the cover art for 'Hymns of Dissension' for your viewing pleasure. Mattias Noren did a wonderful job in capturing exactly what we were looking for in both mood and concept, and it most certainly fits the vibe of the album in our opinion. Absolutely fantastic."

KATAGORY V is scheduled to release "Hymns of Dissension" on October 16 through Nightmare Records (USA/Canada) and Burning Star Records (Europe/Asia). Each version will include two exclusive bonus tracks.