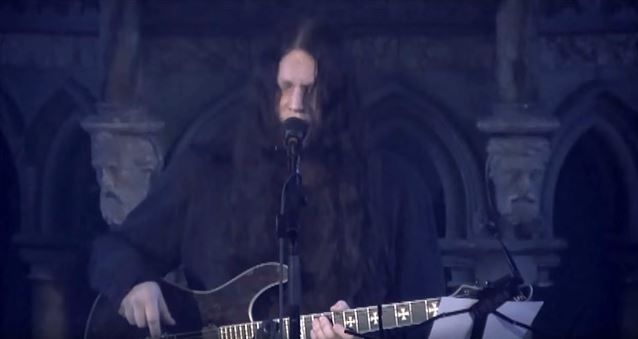 Swedish masters of melancholy KATATONIA have announced the addition of Daniel "Mojjo" Moilanen as the band's new, permanent drummer.

The group — which released a live package titled "Sanctitude" earlier this year — has entered Studio Gröndahl with engineer Karl Daniel Lidén to begin recording its tenth album for a 2016 release.

Comments KATATONIA vocalist Jonas Renkse: "We first met Mojjo back in 2009 where his band at the time, ENGEL, had joined us and PARADISE LOST on a U.K. tour and we soon realized we shared the same musical background and ideals. We stayed in touch over the years and when Daniel Liljekvist quit KATATONIA in 2014, we decided to give Mojjo a call. He has now been with us for well over a year, so far only as a session live member, but now is the time for him to join the KATATONIA album cycle, and, most importantly, make his own impression on our new material. We can’t wait to see what this will lead to. Love him up!"

Added Mojjo: "From 1993 via 2009 to 2014, from today and onward into future battles. I am thankful, delighted and proud to take part in the next phase of KATATONIA and I am looking forward to the journey being as giving as it has been for the last 22 years."

Released in March, "Sanctitude" was filmed and recorded in the stunning, candle-lit setting of London's Union Chapel during KATATONIA's May 2014 "Unplugged & Reworked" tour — an intimate acoustic evening performing tracks from the "Dethroned & Uncrowned" album alongside atmospheric classics from the band's entire career, stripped and reworked. The 80-minute set features 17 songs across the albums "The Great Cold Distance", "Viva Emptiness", "Brave Murder Day", "Last Fair Deal Gone Down", "Dead End Kings" and "Dethroned & Uncrowned", including fan favorite "Teargas". The show closes with the sublime "The One You Are Looking For Is Not Here" and a special guest appearance by Norwegian vocalist Silje Wergeland of Dutch rockers THE GATHERING. The band was also joined on guitar and vocals by THE PINEAPPLE THIEF frontman and songwriter Bruce Soord.