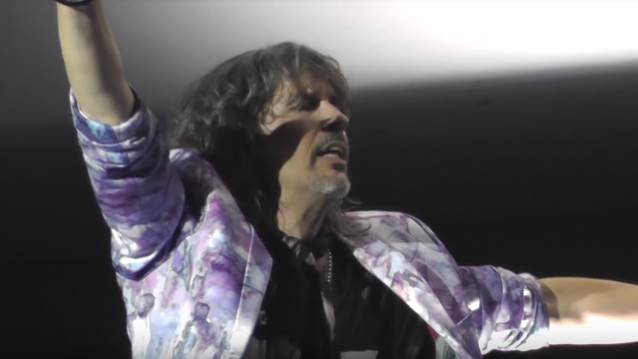 KELLY HANSEN: Why It's Unlikely FOREIGNER Will Release Another Full-Length Studio Album

FOREIGNER singer Kelly Hansen has once again said that it's unlikely the band will release another full-length studio album as a follow-up to "Can't Slow Down", which came out nearly a decade ago. "I think that you're likely to hear new songs," he told The Rockpit. "I don't know if it makes sense to do an entire CD anymore in this day and age.

"The one story that I constantly tell is that we took a year in 2009 to create 'Can't Slow Down', and we were on the road in America and Europe, and in all our 'off' time, we were writing and recording in New York and L.A." he continued. "Mick [Jones, guitar] was coming out to L.A., and it was incredibly exhausting, it was a lot of hard work, it took up any empty time that we had and our energy, and it took huge amounts of money to complete that record. And the day that it was released, people were trading it for free on the Internet. That's really disappointing, when you know how much time and effort you put into something.

"I don't think that model really works anymore; I think it's better to do a song or two at a time," Kelly added. "In fact, we did [the track] 'The Flame Still Burns', and we've done certain things and added them to pieces of our releases lately, but I think it's going to be more a song or two at a time from now on. I would never say never, but from having had that experience, I think people who aren't musicians or trying to make a living as an artist will understand that it's just become the norm now — you don't pay for anything you just get it for free. Or, even if you subscribe to a music service, the amount of cash that goes to the artist for a download or a stream is absolutely inconsequential. It means absolutely nothing to anybody. I'll give you an example. I had a large piece of a song, and I got a statement for my royalties, and it streamed 42,000 times, and I got 42 cents. That's indicative of the times."

"Can't Slow Down" is the only full-length collection of new FOREIGNER songs to have been released by the band since Hansen took over vocals after original singer Lou Gramm left the band for good in 2002. The album entered the Billboard Top 30, driven by the radio singles "In Pieces" and "When It Comes To Love". The band also has released a series of live albums and compilations, including 2016's "In Concert: Unplugged" and 2017's "40".

FOREIGNER's latest release is "Foreigner With The 21st Century Symphony Orchestra And Chorus", which came out in April. The set was recorded in Switzerland in May 2017 and features a 58-piece orchestra and 60-piece choir. It was made available in several formats, including CD, digital, double vinyl, as well as a CD/DVD digipak which is available only at Walmart.

FOREIGNER has joined forces with WHITESNAKE and JASON BONHAM'S LED ZEPPELIN EVENING for a 30-date summer tour that kicked off in Bangor, Maine on June 15.