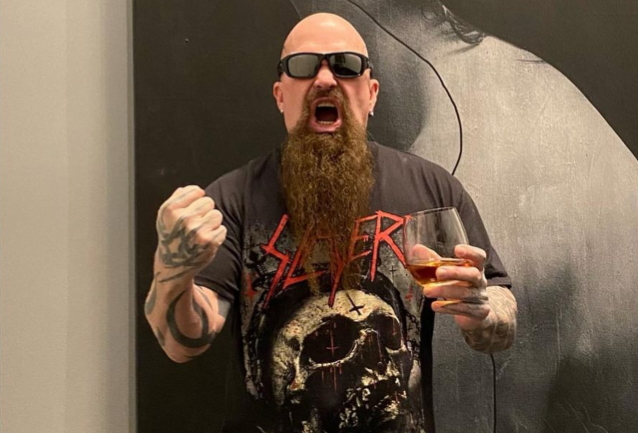 On Monday (November 30),Kerry's wife Ayesha took to her Instagram to share a photo of her husband, and she included the following caption: "Kerry threw on a SLAYER shirt and poured a shot for you all to mark the anniversary of the last SLAYER show one year ago today. Have a shot with us! Cheers friends!"

ANTHRAX guitarist Scott Ian also commemorated the anniversary, sharing a SLAYER picture that he said was taken during "their last band photo shoot backstage at the Forum [in Los Angeles] right before they walked to the stage for the last time."

This past August, Ayesha King said that there will never be a SLAYER reunion. She shot down the possibility of her husband and Tom Araya sharing the stage ever again under the SLAYER banner while responding to a fan on Instagram.

Four months ago, SLAYER drummer Paul Bostaph confimed that he is involved in a brand new project headed up by Kerry King. The duo spent much of this year working on music with the hopes of recording it properly once the coronavirus pandemic has subsided.