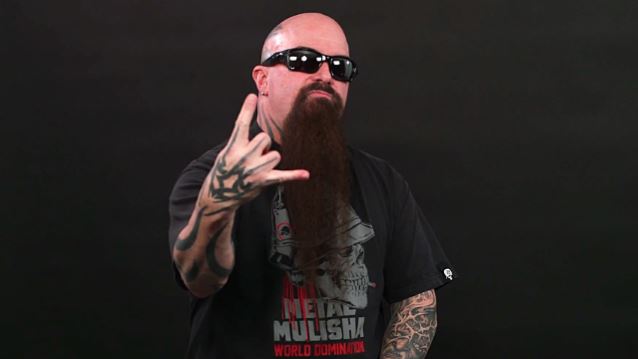 SLAYER's Kerry King has defended himself against accusations that he didn't show enough emotion while paying tribute to his fallen bandmate, Jeff Hanneman, the day of the co-founding SLAYER guitarist's death.

On May 2, 2013, only a few hours after Hanneman passed away from alcohol-related cirrhosis of the liver, King led a very metal tribute to Hanneman at the Revolver Golden Gods awards in Los Angeles, bypassing the usual moment of silence for something a bit more appropriate.

The audience obliged and King added: "We've gotta drink-raise it up. We've gotta first-raise it up and tip one back to our fallen brother."

Asked by Loudwire to go back to the day that he found out Hanneman had died, King said: "I knew he was in the hospital, I knew he was in bad shape, but nobody thought he was in that bad a shape, 'cause nobody raced to get out there. And then, you know, he was gone. And I had rehearsal that day, I had [to appear at the Revolver] Golden Gods [show in Los Angeles], where people gave me shit for not fucking blubbering on mic. But it's a celebration, even in death."

He continued: "I wanted people to celebrate. And they needed it. They needed somebody to say, 'It's okay. We're moving on.' Nobody wants anybody to go to the Golden Gods and just be a fucking downer. I dealt with what I had to [deal] with, I think I got the crowd up for it, and I think that's a good memory of Jeff for them."

In the August 2013 issue of Guitar World magazine, King spoke about the personal relationship he had with Hanneman. He said: "[Any time we would finish a tour, Jeff] would just go home and detach. He might have lived only 45 minutes away, but unless you were part of his inner circle, it was hard to stay in touch with him. And it took me a few years to understand that. For a while I was just like, 'Why isn't this guy calling me back?' But as I got older, I just realized that that was who Jeff was."

"I don't think Jeff and I were ever best friends," continued King. "I think we were probably the closest in the band, but never best friends. To put it in a way that everyone could understand, Jeff and I were like business partners. Was he my friend? Of course he was my friend. But we didn't really act like that. The last time I was at Jeff's house was January 2003. We went to his place to watch the Raiders in the playoffs. And it sounds horrible, but it wasn't horrible. That was just how it was."