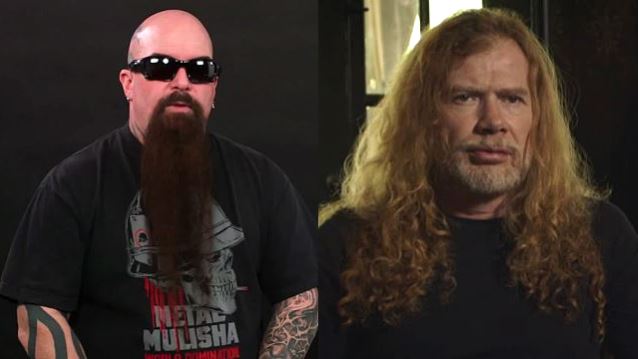 In the latest edition of Loudwire's "Wikipedia: Fact Or Fiction?" signature series, SLAYER guitarist Kerry King was invited to prove and disprove what's written about him online. You can watch the chat below.

Asked about his brief involvement with MEGADETH during the band's early days (Kerry played MEGADETH's first five shows as the band's second guitarist),King said: "I was one of the lucky people — and there's certainly no offense against [current METALLICA guitarist] Kirk Hammett; Kirk's a wonderful friend of mine — but I was lucky enough to see METALLICA with [MEGADETH mainman Dave] Mustaine. And I say that because it's just a rare thing to be able to say that. I saw them play with Woodstock [in Los Angeles], and I was so intringued by Mustaine, because he was just ripping on guitar and looking out that way somewhere. And I can't do that to this fuckin day. So I was just blown away at his guitar playing. And to find out — I think it was through B.C. Rich, 'cause we all played B.C. Rich back then… I think it was through B.C. Rich I found out that Dave was inquiring if I would play [with MEGADETH]."

He continued: "At the end of the day, I thought, 'This is a gigantic learning situation.' And I also thought people would see me and know me from SLAYER. 'Cause, I mean, we only went to the Bay Area; we only got up there. So I think if people saw me, it would at least make 'em think, 'SLAYER.' So I had SLAYER's best intentions in mind. I didn't go and say, 'Hey, I wanna be in MEGADETH.' I don't know how anybody can be in MEGADETH for more than a couple of hours, 'cause that guy's crazy."

Asked if he had any particularly bad experiences dealing with Mustaine in the early days of MEGADETH, Kerry said: "He was cooler back then. I think there's been a lot of drugs and funny extracurriculars between now and then that helped shape who he is today. But it was good times back then. Playing all the venues SLAYER played and just… I don't know… playing different music. His stuff is definitely more… I wouldn't say 'intricate,' 'cause we've got intricate parts too, but it's just… He writes riffs in a very different perspective than I… Even after playing with him for a number of months, I'd still… I wouldn't do it; it's just not my style."

King joined MEGADETH on stage in October 2010 at the Gibson Amphitheater in Universal City, California to perform MEGADETH's classic "Rattlehead". Video footage of his appearance can be seen below.