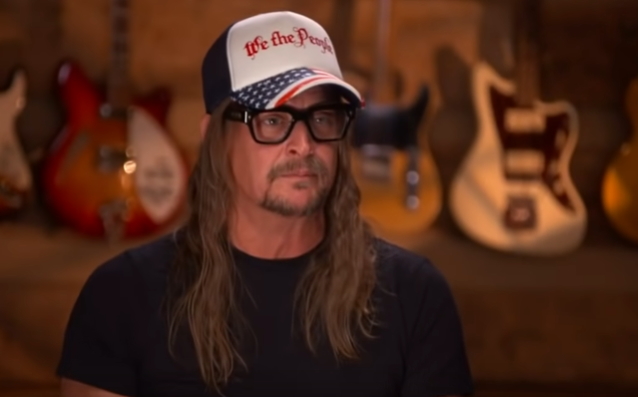 Kid Rock said Donald Trump once asked him for advice about U.S. policy on Islamic State and North Korea.

In an interview with the Fox News host Tucker Carlson broadcast on Monday night (March 21),the 51-year-old musician, who visited White House in 2017 with Ted Nugent and Sarah Palin, said that he was "there with [Trump] one day when he ended the caliphate," referencing U.S. efforts against the Islamic State.

"[Trump] wanted to put out a tweet … I don't like to speak out of school. I hope I'm not. But … the tweet was, and I'm paraphrasing, but it's like, you know, 'If you ever joined the caliphate, you know, trying to do this, you're going to be dead.'

"He goes, 'What do you think?' [I said] 'Awesome. I can't add any better.' But then it comes out and it's … reworded and more political, to look politically correct. And just, 'be afraid."

He also said he and Trump were once "looking at maps. I'm, like, you know, like, 'Am I supposed to be in on this shit?' Like I make dirty records sometimes. I do.

"'What do you think we should do about North Korea?' I'm like, 'What? I don't think I'm qualified to answer this.'"

Kid Rock also praised Trump for speaking "off the cuff".

"I understand what it's like, sometimes you get it wrong. But I would way rather hear somebody come from here [the heart] and get it wrong once in a while."

Kid Rock had previously described himself to The Guardian as "definitely a Republican on fiscal issues and the military, but I lean to the middle on social issues."

"I am no fan of abortion," he said, "but it's not up to a man to tell a woman what to do. As an ordained minister I don't look forward to marrying gay people, but I'm not opposed to it."

He also said he "played Barack Obama's inauguration [in 2009] even though I didn't vote for him. I didn't agree with his policies, but there was an exciting sense of change in the air. That promise hasn't been fulfilled — the country is more divided than ever."

Kid Rock is currently promoting his new album, "Bad Reputation", which was made available digitally on March 21. Physical CDs will arrive on April 6.

I can't tell if he's serious about Trump soliciting his advice on North Korea pic.twitter.com/kCCxq8JcBz