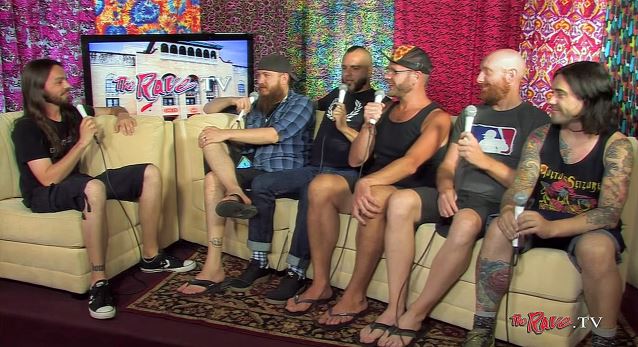 The Rave TV's Alex Stafford conducted an interview with Massachusetts metallers KILLSWITCH ENGAGE before the band's July 31 concert at The Rave in Milwaukee, Wisconsin. You can now watch the chat below.

KILLSWITCH ENGAGE singer Jesse Leach recently finished laying down vocals on five songs for the band's forthcoming seventh full-length album. The follow-up to 2013's "Disarm The Descent" is tentatively due in early 2016 via Roadrunner.

Leach wrote in a post on Instagram: "[I am] pretty stoked on the song I just finished. It turned out to be quite unique sonically and lyrically. It's an ode to the road, the trials and triumphs, the friendships and long-distance love."

He continued: "So far this record has a little bit of everything, and I couldn't be happier with it. [I am] also pushing my voice to higher registers and allowing the grit to come through, which definitely suits my style as a vocalist.

"The topics are pretty heavy so far on the first four (even though they are all very different from each other,) so this one rounds it out with a more uptempo sing-along feel (almost punk rock meets '80s metal riffs with double bass for good measure)."

Jesse added: "I truly hope KILLSWITCH ENGAGE fans of all types will be able to find something they dig on this record. That being said, so far I truly feel I've put my everything into this record."

A KILLSWITCH ENGAGE concert film shot on October 31, 2014 at The Palladium in Worcester, Massachusetts will be included on the band's next DVD release, tentatively due before the end of the year. The performance footage was filmed by the direction team of Ian McFarland and Mike Pecci (FEAR FACTORY, MESHUGGAH) using five Canon C300 cameras outfitted with Zeiss Prime Super Speed Lenses.

KILLSWITCH ENGAGE recently finished recording a new song, "Loyalty", that is featured on the mixtape for HBO's hit fantasy series "Game Of Thrones".