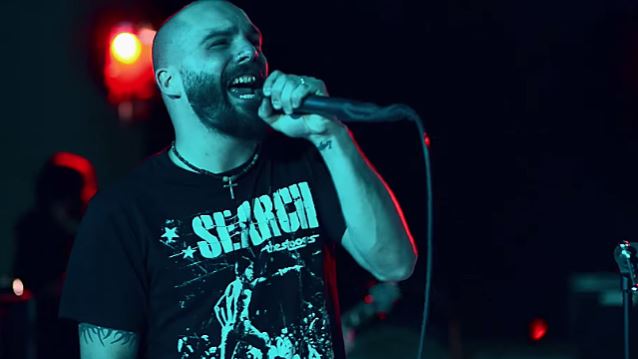 According to KILLSWITCH ENGAGE frontman Jesse Leach, the band has just finished recording vocals for a song that will appear on an upcoming "Game Of Thrones" mixtape from HBO. The sessions for the track were once again helmed by KILLSWITCH ENGAGE guitarist Adam Dutkiewicz. Leachwrites on his Instagram: "Pretty stoked! #MassiveRiffs"

In a February 2014 interview with Australia's The AU Review, KILLSWITCH ENGAGE bassist Mike D'Antonio stated that the band's more aggressive approach on "Disarm The Descent" was an evolution and progression that came about naturally.

"A lot of it had to do with the demos that people bring." he explained.

"Usually we’ll spend a couple of weeks by ourselves at home creating demos. I use GarageBand on a Mac and then we'll go in to practice and we'll all sit around and play these demos and talk about which songs would work or what songs would need a little bit of push, and if we need to rewrite a song, we'll go down to Adam's setup and just hash it out right there on Pro Tools. Joel [Stroetzel, guitar] will get on guitars, Justin [Foley, drums] will usually do the drums and we add our own flavor to it. It's a really streamlined way of writing, but as far as the aggression goes, like I said before, I was definitely pulling hairs out of my head and I think everyone else was too."

He continued: "When we first started listening to demos, I went first and my demos were blazing fast! I turned to Adam, and he turned to me and said, 'This is exactly what I want to write. This is the same style.' So whether that had a bearing on how fast or how aggressive the new record was, that was definitely set in and it was a conscious decision to write something that was going to kick."