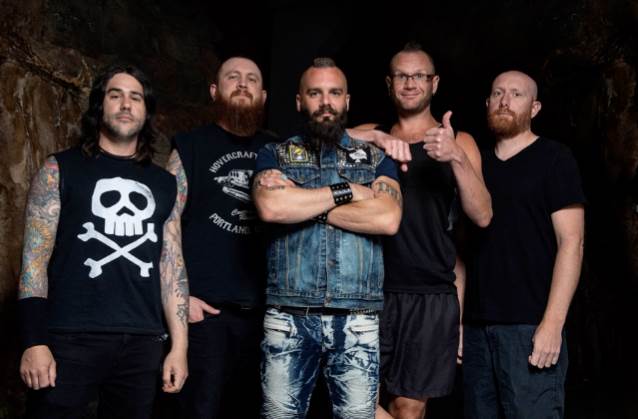 Massachusetts metallers KILLSWITCH ENGAGE have signed with Metal Blade Records. The band's upcoming album will be made available through Sony Music Entertainment outside of North America.

Metal Blade's CEO/founder Brian Slagel commented: "I have been a huge fan and friend of KILLSWITCH for a long time, so it is truly an honor to be able to work with them. So happy to welcome them to the Metal Blade family."

Added KILLSWITCH singer Jesse Leach: "I'm beyond stoked to sign with the legendary Metal Blade Records and Columbia/Sony Music. It's clear they truly understand and believe in what we do as a band, and we're psyched to have them on our side. It's an exciting new chapter for KILLSWITCH ENGAGE and we can't wait to see what the future holds."

Said guitarist Adam Dutkiewicz: "I'm very excited to say that KILLSWITCH ENGAGE will be joining forces with Metal Blade Records and Columbia/Sony Music! Super stoked to join the ranks with a long list of many epic metal acts, as well as a team of excellent human beings who truly have a genuine love for metal music. Here's to an awesome future with awesome labels!"

Benjamin Voss, senior A&R manager Columbia/Sony Music Germany, stated: "I am very happy and proud to work with such an amazing band like KILLSWITCH ENGAGE in the future. We are absolutely excited about releasing their new album on Sony Music outside North America."

Other than the band's 2000 debut self-titled LP, which came out through Ferret, all of KILLSWITCH's recorded output so far has been issued through Roadrunner Records.

The group's first release under the new deal — and eighth album overall — will arrive in 2019.

In a recent interview with Finland's Kaaos TV, KILLSWITCH ENGAGE bassist Mike D'Antonio stated about the progress of the recording sessions for the band's new disc: "Unfortunately, [singer Jesse Leach's recent] throat surgery put a little cramp in the production of the record. As of now, we have 22 songs, so we're gonna pick the best ones. But it's good to have more than less and then have to play make-up later. But drums are done, bass is done, most of the guitars are done, vocals not so much. So as soon as we get those done, this record will be out."

According to D'Antonio, KILLSWITCH, which is currently supporting IRON MAIDEN on a European tour, recorded the basic instrumental tracks for all 22 songs. "Whether we do that with vocals, I'm not positive," he said. "We're gonna try. We're gonna do our best."

"It was news to me; I didn't know he was gonna come [into the studio and lay down his vocals]," the bassist admitted. "But much like how Jesse was in the past when he wasn't in the band, we remain friends with these guys. We care about these people. They were in our family for a long time, and it's not like you just forget about somebody, especially Howard. He's a great dude, and it was cool to know that he could come back and sing on the new record and help sing some backup stuff. And we hung out with him recently. He's doing really well, his new band [LIGHT THE TORCH] is awesome, so we couldn't be happier for him."