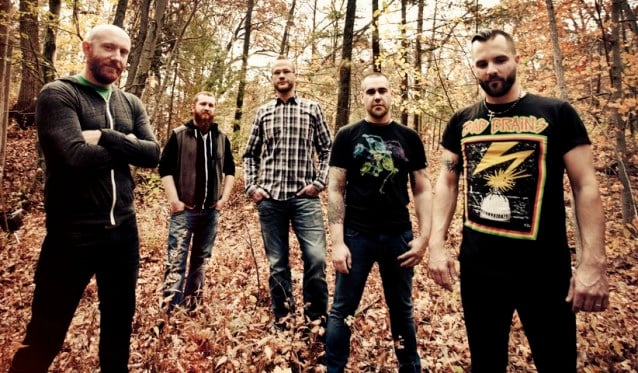 Massachusetts metallers KILLSWITCH ENGAGE are tentatively scheduled to release their new album in March via Roadrunner. The follow-up to 2013's "Disarm The Descent" is currently being mixed by KILLSWITCH guitarist Adam Dutkiewicz, who also produced the new effort.

Said KILLSWITCH ENGAGE singer Jesse Leach in an Instagram post: "It is slowly starting to hit me that the record of my entire career is finished and soon to be revealed to the world. What a beautiful mix of anticipation, gratitude, vulnerability, joy and catharsis.

"I seriously cherish these days living inside a childhood dream and watching it become my reality daily. I have to remind myself that, despite my struggles and trials, my determination and circumstance have brought me to a place that far surpasses my hopes and desires.

"Counting my blessings and preparing for the journey ahead! So thankful and overwhelmed at the moment. You never know what possibilities await you as you rise to greet another day. Thankful, humbled and excited as the time approaches yet again for the unleashing of a collaborative effort of passion and expression."

KILLSWITCH ENGAGE drummer Justin Foley recently told Louder Noise that the band's next album will "definitely [be] a little different record than last time. Last time, it was really, really fast the whole way through. This one doesn't have quite the same speed to it, but has a different kind of heaviness to it, I think — a little bit of moodiness to it. I don't really know how to describe it yet."

He also talked about the new KILLSWITCH ENGAGE song "Strength Of The Mind", which the band has been performing live. He said: "I think that one is a good representation of stuff that we do. But I also think it's a song that would sound good live. It's a song that wasn't crazy, crazy fast, it wasn't crazy different from any of our stuff, so I think it was a good song to kind of ease into new material. I think live, it was the kind of thing that we could get it to sound tight fairly quickly, which is helpful, 'cause we didn't have a whole lot of time to get it ready for [the last] tour. So that kind of helped us influence picking that song."

"Disarm The Descent" was KILLSWITCH ENGAGE's first album with Jesse Leach at the vocal helm since 2002's now-classic, genre-defining "Alive or Just Breathing".