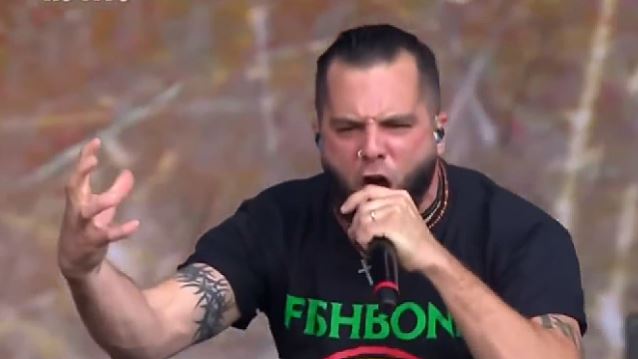 Brazil's Wikimetal podcast recently conducted an interview with vocalist Jesse Leach of Massachusetts metallers KILLSWITCH ENGAGE. You can now listen to the chat using the SoundCloud widget below.

Asked when fans can expect the follow-up to last year's "Disarm The Descent" album, Leach said: "After this South American run [at the end of August], we're gonna take some time off and start demoing and start writing. We're actually really looking forward to getting some new material out. So, hopefully, by the end of this year, we'll have some material ready to go. We'll see what happens, but we're definitely stoked on it."

"Disarm The Descent" is KILLSWITCH ENGAGE's first album with Leach at the vocal helm since 2002's now-classic, genre-defining "Alive or Just Breathing".

Regarding what life has been like for him since he returned to KILLSWITCH ENGAGE in January 2012 after a decade-long absence, Leach told Wikimetal: "It's been mindblowing, man. It's life changing, it's incredible. It's been crazy, too, at the same time; my whole life has changed. I've seen the world and I've been able to play in front of thousands of people. And I get to do what I love and make a living doing it. So I feel very blessed to be able to do that. It's been a blast, man."