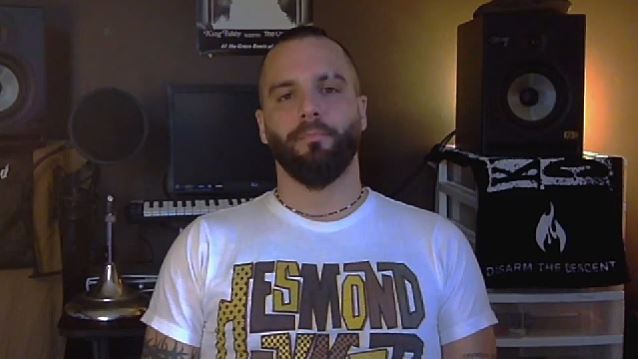 KILLSWITCH ENGAGE's JESSE LEACH: 'If I Could Put Out A Reggae Record, I Would'

In a brand new interview with Australia's Hysteria magazine, KILLSWITCH ENGAGE singer Jesse Leach was asked for his opinion on segregation of modern music into categories and whether it's dangerous to stay within them. He responded: "I hate terms of segregation and genre. They are necessary for people to sort of understand in a language to describe what you're hearing. For me, I grow very weary and extremely bored with genres. And the fact that KILLSWITCH is the kind of band that it is, it kind of forced us, in a sense, to write within specific parameters, because people expect that of us, and that's fine. I get it. At the end of the day, it's what keeps the beast moving and keeps the fans happy. But that's why I do so many things on the side. Even stuff that doesn't see the light of day. I just can't stick to one style."

He continued: "I'm a huge reggae lover. I'm huge punk rock lover. Jazz/classical, you name it, I like it! It about knowing your strengths and weaknesses. I'm pretty decent at what I do with KILLSWITCH, and I tend to stick to that. But my true loves and what I'd rather be spending my time doing, I don't think it would jive with most of my fans."

Leach added: "If I could put out a reggae record, I would."

In the same interview, Leach spoke about how the wall between the artist and the fan has been lifted with the advent of social media. He said: "When I was younger, I didn't know much about a lot of my quote-unquote 'heroes'; it was before the Internet, you know? I only found out about them when I went to see them perform. Coming from the punk and hardcore scene, I was able to talk to them, eventually."

He continued: "The bridge between audience and performer got really big for a while in this music, especially with KILLSWITCH and bands of that caliber, in the mid-2000s. Now it's levelling out. It's a very comfortable place to be, for me."

Leach added: "I never saw crowd barriers and security as a positive thing. I get it. It's to protect people, but it further creates the illusion and the barrier between fan and performer. That's why [my recent Australian] DJ tour [was] a way for me to do that. To get into a room with people where there's no security and [I am] mingling with people, having drinks with them and singing along with them to songs because I'm playing those songs, you know?"

KILLSWITCH ENGAGE recently finished recording a new song that will be featured on the upcoming mixtape for HBO's hit fantasy series "Game Of Thrones".