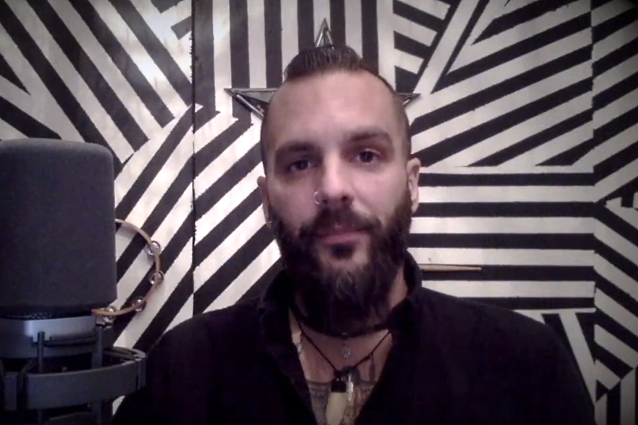 KILLSWITCH ENGAGE's JESSE LEACH: 'We Have A Lot Of Liars And Deceivers At The Top Of Our Country'

During last month's Headbangers Con, KILLSWITCH ENGAGE singer Jesse Leach was asked by Rocking With Jam Man if he still stands by his statement from August 2020 that if there was ever a time for a revolution, that time is now. He responded (as transcribed by BLABBERMOUTH.NET): "More than ever — more than ever we need a revolution. The two-party system does not work. It's broken. It's been broken for a long time. We have a lot of liars and deceivers at the top of our country. I don't care who's the president. They're all a bunch of liars. We need to burn it down, and the people need to take over and take this country back. Period."

Last summer, Leach blasted the "deceptive, corrupt and opportunistic government" for using "disinformation and propaganda tactics" to keep the population "in a state of paranoia and hysteria." He wrote in an Instagram post: "Fear is the new currency by which we are all bought and sold by a ruling class that has little to no regard for its people. They benefit greatly from our fear and division as they slowly dismantle our economy. Something has got to give but it's in our hands 'we the people.'

"We are living in an age where our own people have become such bootlickers and lapdogs that they can't see their subservient ways are the reason why we can't muster up enough unity to push back! Instead of fear we need to gather our righteous anger and use it to organize and demand accountability and factual answers. They use our deaths as a platform and a number on a chart to continue to push their agendas. We are nothing but numbers in their eyes. They use any means necessary to manipulate and control us.

"We must wake up before it is too late and this Orwellian totalitarian state is solidified. If there ever was time for a revolution that time is now! Alas we are all so sedated, divided and force fed by false and ever manipulated information passed off as 'science' that previous and powerful unity is a distant hope. What a surreal and complicated shit show we are all living in. I won't submit".

Leach has been an outspoken critic of the U.S. government for a number of years. In a 2018 interview with Louder Sound, he said that "the majority of politicians are complete liars and the system that we're under is all smoke and mirrors and deception. It's a total scam. I completely disagree with all of it and I've become much more of an anarchist these days. I think we're being lied to constantly.

"I know it sounds really dismal and dark, but I don't believe that voting matters at all," he continued. "That's just where I'm at right now. I think it's all bullshit. For me personally, as a lyricist and a songwriter and someone who's paying attention, I like to walk a fine line when addressing these issues in music.

"I don't have enough information to truly know everything that's going on, so it's difficult for me to take a hard stance on something when there are so many different angles.

"I just want people to think; I don't want to sway them in one direction or the other," he added. "But I do think it's important to be aware of what's going on around you."

Last May, KILLSWITCH ENGAGE dropped "Atonement II B-Sides For Charity", with 100% of the proceeds donated to the COVID-19 Relief Fund for the Center for Disaster Philanthropy. The release featured six songs from the recording sessions for KILLSWITCH ENGAGE's 2019-released and Grammy-nominated album "Atonement", out via Metal Blade Records.