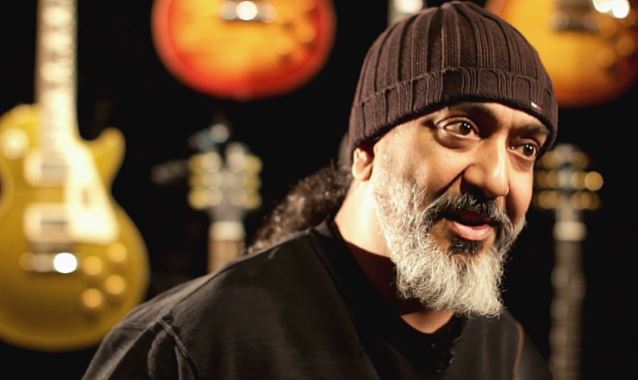 According to The Pulse Of Radio, SOUNDGARDEN guitarist Kim Thayil said in a new essay which he wrote for Rolling Stone that his band at first resisted early attempts to compare them to acts like LED ZEPPELIN. Thayil explained, "We started getting that a lot: 'ZEPPELIN, ZEPPELIN, ZEPPELIN,' and we were, like, 'Okay, let's check some of this out.' We were all very acquainted with it individually, but collectively we weren't sitting around the table listening them. So initially we would deny that influence."

Thayil added, "Eventually, after practice we'd be like, 'Let's check out 'Led Zeppelin IV'. Let's listen to 'Houses Of The Holy'.' Like, ‘Yeah, I guess I can kind of see that a little bit.' It became very important to us, because of the comparison, so we would listen to it and start referencing it. Ultimately, we started to re-embrace the ZEPPELIN, BEATLES, SABBATH and PINK FLOYD."

Thayil told The Pulse Of Radio where he thinks SOUNDGARDEN's style really came from. "As a band, I think we really sprang from two things: this sort of British, moody, goth-y, bass riff-oriented music like GANG OF FOUR, JOY DIVISION, BAUHAUS, KILLING JOKE, and then this guitar-oriented, post-hardcore thing in America, like the MEAT PUPPETS and HÜSKER DÜ and the BUTTHOLE SURFERS," he said. "I think those were two things that were really playing into what SOUNDGARDEN was about collectively when we formed, you know, in '84."

Thayil's Rolling Stone essay was written in commemoration of the 40th anniversary of the release of LED ZEPPELIN's classic double album "Physical Graffiti". The record was reissued in a deluxe edition last week.

Thayil recently told The Sydney Morning Herald that SOUNDGARDEN plans to make a new album in the next few months for a 2016 release.

The new disc will be SOUNDGARDEN's seventh studio effort and will follow up 2012's "King Animal".