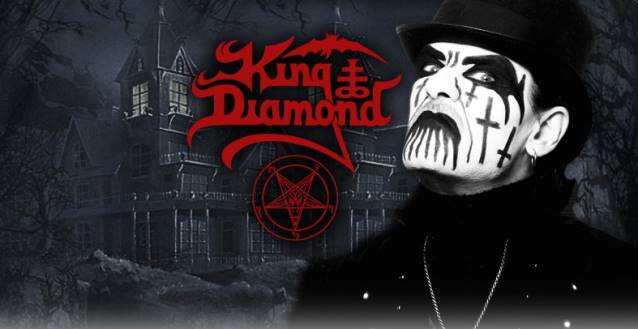 Danish heavy metal singer King Diamond has revealed to RollingStone.com that he is working on a new album from his namesake band, tentatively due next year. "We've done a lot of stuff," he said. "We are going in some new ways that are going to be amazing."

He continued: "I've been building a studio so I can do my vocals at home. Once it's completed, we can start recording.

"[The record] will encompass the things I need to write about after what I went through. But I can't say much about it because I haven't talked to the rest of the band about it."

Asked what the hardest part of his recovery process has been, King told RollingStone.com: "It's tough to learn to breathe again. The doctors collapsed my lungs to do the work. When I woke up, it felt like I was being choked to death. I tried to pull the tubes out of my throat. The doctors tied me down to the bed. In my head, I was thinking, 'Fucking kill me.' It was horrible. I'm going to have to describe that feeling on the next album."

KING DIAMOND's video for the song "Give Me Your Soul" can be viewed below. The band's first clip in 17 years was shot in September 2007 with director Bill Schacht from video company Aestheticom, which had previously worked with DIO, ALICE COOPER and DREAM THEATER, among other artists. Speaking to MTV.com, the group's frontman/namesake — who was suffering from a herniated disc at the time — said about the video shoot, "They limited what I had to do, of course, so I only did one day of shooting for 90 minutes, but just standing there moving a little bit in the full outfit was very difficult. And afterwards, I got one of those sharp attacks of pain that I hadn't had in a month and a half. The only thing I can compare it to is a really super-bad toothache or earache. And afterwards, I was like, 'OK, I'm not ready [to tour] yet.' "