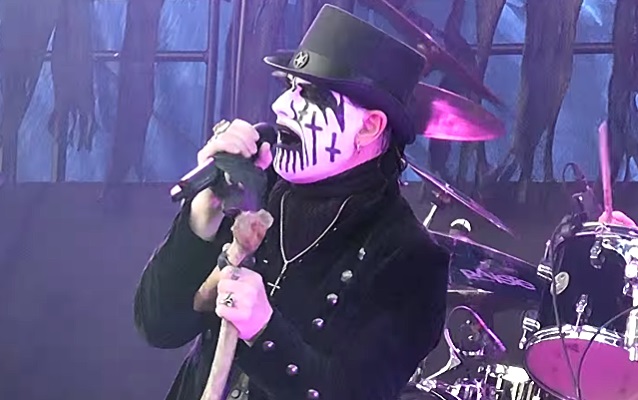 Speaking about when KING DIAMOND will officially start working on material for the follow-up to the band's 2007 album "Give Me Your Soul...Please", Andy said: "I've been really busy [producing other bands at my studio in Sweden] until we went on the [Rockstar Energy Drink] Mayhem [Festival] tour this summer. I was really busy until then. And since we got back from the Mayhem tour, I think I've only been in the studio for, like, three days, because we've been so busy preparing for this tour. But, actually, we're gonna have a little break after this tour, and after that break, we're gonna start writing music for the next album."

He continued: "We have some riffs, but once we start getting into the process, it's gonna be brainstorming and all that stuff. So it's gonna be somewhere, I guess, in maybe February, we're gonna start doing that."

As previously reported, Philadelphia (November 25 at The Fillmore) and Detroit (November 28 at The Fillmore) have been selected as the cities on the "Abigail In Concert 2015" tour at which KING DIAMOND will film the live shows for the band's forthcoming DVD. The massive, multi-camera shoot will be directed by Denise Korycki (CANNIBAL CORPSE, KILLSWITCH ENGAGE),and will also include additional footage from multiple shows throughout the trek.