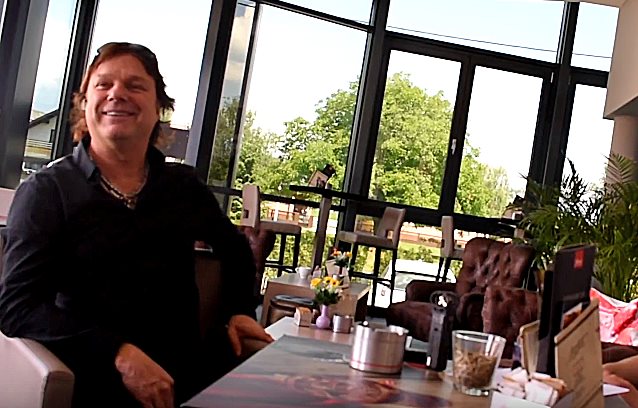 KING DIAMOND guitarist Andy La Rocque was interviewed by Metal Jacket Magazine the day after his May 16 performance in Zagreb, Croatia as a guest at a concert of Zele Lipovača, longtime guitarist of the Bosnian heavy metal band DIVLJE JAGODE. You can now watch the chat below. A couple of excerpts follow (transcribed by BLABBERMOUTH.NET).

On the progress of the songwriting sessions for KING DIAMOND's long-awaited follow-up to 2007's "Give Me Your Soul … Please" album:

Andy: "I can't really say that we have started working on it yet, but it's coming. So as soon as we have some time, we're gonna start working on new songs."

On the KING DIAMOND songwriting process:

Andy: "What [KING DIAMOND singer and namesake and I] do is we both have our studios, so we send files [to each other], and if there's something that needs to be changed, we just talk about it and have it changed."

On the status of KING DIAMOND's much-anticipated DVD:

Andy: "We're actually still working on it, because we have a few options — different shows and stuff — so we have to make a decision which one is the best. And it's hard to know that before you start working on it. And you know the picture and the sound — that combination — have to match, of course, and when you see the whole thing, [you go], 'Okay, that show is really good.' So we're still working on it. And I have no release date; I'm sorry about that. We just want it to be really, really good."

KING DIAMOND's November 2015 concerts in Philadelphia and Detroit during the "Abigail In Concert 2015" tour were filmed for the band's forthcoming DVD. The massive, multi-camera shoot was directed by Denise Korycki, who has previously worked with CANNIBAL CORPSE and KILLSWITCH ENGAGE).

KING DIAMOND received a Grammy nomination in the "Best Metal Performance" category for the track "Never Ending Hill" off "Give Me Your Soul … Please".