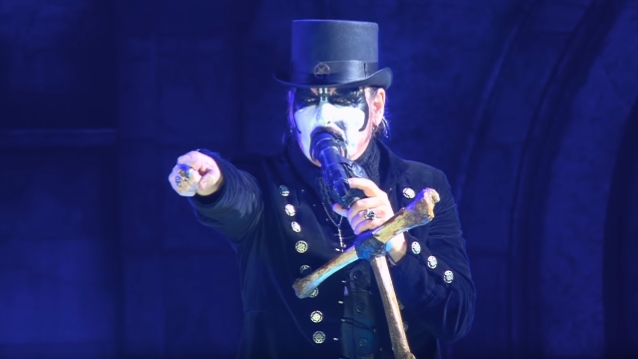 KING DIAMOND's Next Two Albums Will Tell 'Gruesome' Story: 'It's Gonna Be Very Creepy,' He Says

King Diamond was interviewed on the March 22-24 edition of Full Metal Jackie's nationally syndicated radio show. You can now listen to the chat using the Podbean widget below. A couple of excerpts follow.

Full Metal Jackie: Since your last studio album, you underwent very serious heart surgery and you also had a son. How have such major life events been influencing lyrical ideas for your next album?

King: "Oh, the next album's gonna be gruesome — absolutely gruesome. The storyline is… well, it's in a way where I can't even put it into just one album. So, it has to be over two albums. And it's really planned out to work in a very special way with the show as well. So the show is being built right now in Denmark and it's built around that story, so that it really can go hand in hand. Right now, I already know how the production will develop for the next tour, after this tour, so that when we do part two of that story, I know how the whole thing ends, of course, already, and I know how the production is gonna change and how it's gonna be culminating in one very, very big thing. So it's a long project, several years. Actually, the next three years are gonna be very, very intense for us. There is a lot of things that is in the planning. Also, after we signed up with 5B [artist] management, a lot of good stuff is coming out of that, piece by piece. We are getting a plan that is gonna be amazing for our fans for the next three years — something that's gonna come that they would not expect, I think. So some very, very cool prospects.

"[The album] has something to do with parallel worlds and punishment, and other stuff like that. You'll see us torture our dear little Abigail on stage. It's part of the story; you'll see it. But it's great to be here enjoying life. And [my son] Byron, it's been almost two years now [since he was born], and it's incredible. But it hasn't changed me very much when it comes to what I stand for and the stories that's coming and the musical style that's coming. It's total, utter KING DIAMOND."

Full Metal Jackie: The next album is said to be a story set in a 1920s mental institution. What makes that time and place a good setting for a KING DIAMOND album?

King: "Actually, I chose that because I think it's a very creepy scenario. And the thing is that I know that somebody has talked about that, but that's not the setting, actually. There's a lot of other things involved, but the setting looks as if it was a 1920s asylum — that's exactly what it looks like. And some of the things that go on that we're gonna show onstage is also things that certainly was going on back then, when medicine was beginning to take a beneficial turn in history and actually being able to help human beings live longer. But there was some experimentation going on, too, that was absolutely gruesome. Some of that is involved in the story, but it's something totally different. Once you get to the second part of the story, you will begin to suddenly understand that, 'What the hell is going on here? What is this really about?' Cause there's a whole different story that will not come to you till second part. But in the first part, you're gonna get to know a lot people at a certain place.

"Instead of telling the story — it's way too much — but it does take place, I won't say where, what it's called, because that's the title of the album and I won't let that out yet. But some of it takes place here, this world, and some of it takes place in a parallel world. And there's a correlation between what happened to me and what happens to some people in this place and where they suddenly appear. And you will find out why they are there, how they appear there and the places down the road. I won't say too much right now, but it's gonna be very creepy.

"The stage that we're building for this is gonna be something else. Some of the things that are gonna happen onstage will be also very, very amazing. We are adding an extra floor to the whole thing, [to] what we had last time. We had stairs leading up to a second floor, and there's gonna be a third floor as well now. And I don't like heights very much, so this is one of these stupid things I like to do to myself sometimes. I test myself and see how I'm gonna feel when I'm up there on the third floor — looking out over [with] only a broken banister to make me feel safe, you know."