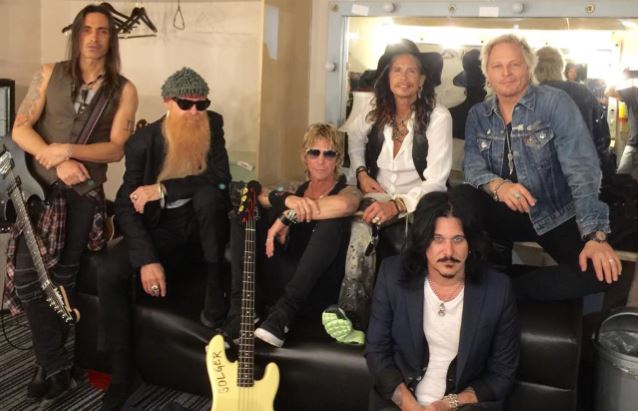 KINGS OF CHAOS — the touring project featuring former and current members of AEROSMITH, GUNS N' ROSES, ZZ TOP, CHEAP TRICK and EXTREME — is in the middle of another South African tour.

Video footage of KINGS OF CHAOS' two Johannesburg concerts on November 29 and November 30 can be seen below.

KINGS OF CHAOS is the brainchild of Sorum, who puts together different members of legendary rock bands to form a supergroup that then performs the individual musicians' big hits at selected concerts.

Regarding why he decided to put together a supergroup after playing in GUNS N' ROSES, VELVET REVOLVER and THE CULT, Sorum told The AU Review in a 2013 interview: "I'm at that stage of my career where I haven't really got the energy to go and try and create a band. I mean, how many bands do I have in my back pocket? I'd rather just get a bunch of great guys together that everybody knows and go and play a bunch of shows to 60,000 people, like, 'Whoa.' Even VELVET REVOLVER, it took us 18 months to build that up, and we were on the road like 20-year-old kids. So my thing was, number one I don't really want to go on the road for 18 months anymore, which will basically kill you, unless you're doing hard drugs and I don't do hard drugs anymore, and I don't drink anymore, and the rest of it's just kind of boring. So I'd rather go and do great festivals and do two- or three-week tours, go out and just have a blast and then go home and then think about the next thing."

He continued: "This idea that I came up with, this is like a release for all the other guys, because it's fresh for them. Even though we'll be playing all our hits, it's all with all our friends and the buddies that we've met through years and years of rock 'n' roll."

Matt also admitted to the difficulties supergroups and conflicting schedules can make, explaining: "Well, you know, everyone's always so busy, so it can be hard with everyone all over the place. But you know, it's really great, I'm really blessed. I look at it like I'm a kid that grew up listening to and wanting to play rock 'n' roll, and now I’m in this community of all these great musicians. So I said, well, fuck it, why don't I take advantage of that and put a band together and go play?"