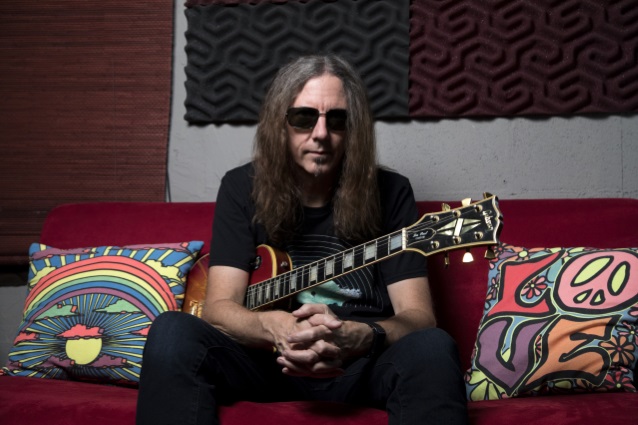 KING'S X guitarist Ty Tabor does not have fond memories of his guest appearance on "Frequency Unknown", the sole album Geoff Tate released under the QUEENSRŸCHE banner during a period when the singer was battling his former bandmates over the rights to the group's name.

"Frequency Unknown" arrived in April 2013 amidst a swarm of controversy. QUEENSRŸCHE had just split in two, with Tate leading an all-new group of musicians while the remaining members of QUEENSRŸCHE — guitarists Michael Wilton and Parker Lundgren, bassist Eddie Jackson and drummer Scott Rockenfield — carried on with a new vocalist, Todd La Torre.

Asked by "The Classic Metal Show" in a new interview what the experience was like making an appearance on such a questionable release, Tabor said (hear audio below): "Uncomfortable, because when I agreed to do it, I thought that I was agreeing to play a solo on one of Geoff's solo albums. I didn't realize it was that when I agreed to it. So I sort of stepped into the controversy accidentally. And I don't know if you noticed — I didn't say a word about it on any of it on my social networks, I didn't promote it or anything, because I felt bad about it. I went ahead and did it 'cause I gave my word, but I didn't realize that's what it was when I said yes. I misunderstood."

The "Frequency Unknown" artwork featured a fist brandishing three rings — one with an F, another with the QUEENSRŸCHE logo and one with a U, leading fans to surmise that it stood for something explicit and was taking a shot against Geoff's former bandmates.

Tate later talked about the decision by his then-record label Deadline Music/Cleopatra Records to make available "new and improved" mixes of "Frequency Unknown" to any customers who purchased the original mix version and were dissatisfied with the audio. He told Oregon Music News: "I think what happened with 'Frequency Unknown'; the people that own the record [Deadline Music] got cold feet. Someone said, 'Oh, I don't like the mix on this.' By that, I mean people close to the record company — that person said, 'I can do a better job mixing it if you give it to me to remix.' So what it came down to is that they [Deadline Music] didn't stand by me, they didn't stand by the project; instead they passed the record along to people to remix. Well, by doing that, it reinforces the idea that it sounds bad! [Laughs] They couldn't let it be for what it was — instead they opened a can of worms."

Tabor's new solo album, "Alien Beans", will be released on January 12, 2018 via Rat Pak Records. The effort is a double-disc album that features 10 new studio tracks and a "best-of" compilation disc. The "best-of" disc is comprised of 11 remixed and remastered tracks personally selected by Tabor from his previous releases.