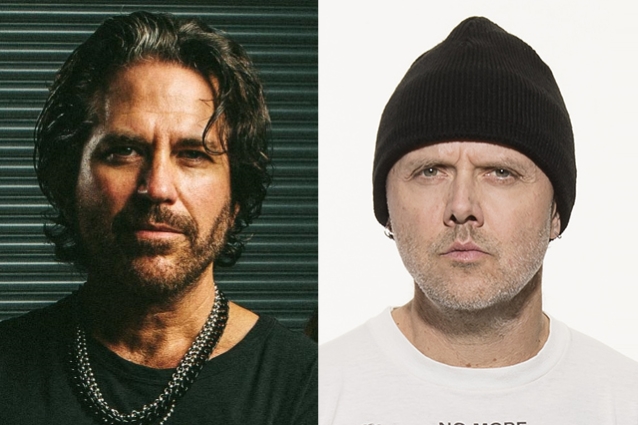 WINGER frontman Kip Winger recently spoke with Julia Bueno of Brazil's "Lokaos Rock Show". The full conversation can be seen below. A few excerpts follow (as transcribed by BLABBERMOUTH.NET).

On "Get Jack", the "musical thriller" he wrote with writer-director Damien Grey:

Kip: "It's a story about the five women Jack The Ripper killed, who come back for vengeance on Jack. It's two hours long — two-act musical theater — and we are about to release the concept album probably in the next three or four months. It's being mastered now and we're doing the artwork, so the album should be out soon, and then we're trying to get it on stage for a lab in September and then hopefully in a theater later this year."

On how writing a musical in which he's not performing differs from playing music himself:

Kip: "It's very interesting to write to the lyrics that have already been written. I've never done that before. Reb [Beach, WINGER guitarist] and I write songs, and then I write the lyrics afterwards, so I was writing to the lyrics, and it was a very interesting experience. I liked it a lot, actually. The musical combines my classical side with my rock music [side], so... everything that I do is all in 'Get Jack'. It took me three and a half years to write it. It's a big project."

On whether his classical training influenced WINGER's music:

Kip: "Studying music over the years has expanded my ability to keep coming up with new ideas that are interesting, rather than just writing the same old song over and over again. I'm always working with different ways to create rock music that's a little different than you would normally hear and classical music that's more kind of in the rock world, that's a little more powerful and a little bit more heavy and expressive. They feed each other, and it works for me, but I don't recommend it because it's a lot of work."

On whether he objects to WINGER being lumped in with other "hair bands":

Kip: "It's fine, because we grew out of that era. When I was in ALICE COOPER and I left to do my band, DEF LEPPARD and BON JOVI were the big bands. I wanted to do something a little bit more progressive, like YES meets KISS. We did something not like that, but there's a lot more technical stuff going on in the riffs. I think as time goes on, people that actually listen know the difference. It's fine now, and it got us in. We did very well in the beginning. I do feel like there was some misconceptions about who the band was, and still there are, but I think especially for the fans, they really understand what the difference is."

On his years with ALICE COOPER:

Kip: "Alice is the consummate rock star. He's our Mick Jagger. Learning from Alice Cooper was unbelievable. I was a waiter waiting tables in New York, and then I got the job and then playing arenas, so it was, like, all the way to the top like that [snaps fingers]. He's very good with interviews and he's really fun to watch when he's off stage — very, very funny, but [a] very serious artist and [an] extraordinarily talented performer and songwriter. I owe him a lot. He's very supportive of my career, and I'm very happy to still be able to call him up."

On whether his feelings about "Beavis And Butt-Head" have changed over the years:

Kip: "It was hard for all the '80s bands when that happened, because they were ushering in WHITE ZOMBIE and NIRVANA and PEARL JAM and all of those bands. All of the '80s bands like us were portrayed as uncool, and I was really singled out by it. It didn't help me at the time — we all lost our record deals, and all of a sudden, we couldn't get a job — but inadvertently, it created an opening for me to really study classical music, so instead of [getting] drunk every night, I studied through that time, and I did a really hardcore 10 years of studying classical music. For me, it turned out to be a very good thing. Now, it's totally fine — people are like, 'How'd you get your name on the t-shirt?' We sell that t-shirt, so it's completely fine with me."

On Lars Ulrich throwing darts at his poster in METALLICA's "Nothing Else Matters" video:

Kip: "I never met METALLICA. I've never met them to this day. I have no idea why that was happening — none whatsoever. It's just kind of immature to put down other musicians and stuff like that. I think they were just on a high that they were the biggest band at the time, and he had something against me. I have no idea, really — that would be a question for him."

Kip: "After the reunion, we did 'Winger IV', and that was where I kind of put more progressive music into the band. It's interesting, because it didn't go over very well, but now, a lot of people, it's their favorite album after it grew on them after a while. A lot of musicians really got it, and I admit that I was writing it for musicians, basically. It didn't do that well, so my answer to that was 'Karma', which was much more like the first album. 'Karma' did very well. 'Better Days Comin'' was kind of a convergence of the first album and some of the later stuff that we did. I think there's evolution there, and we're trying to continually define that. We're going to be writing this year to try to come up with a new album. It's always difficult to figure out what we should do now, because we have the more progressive side and the more pop side, and how to make that work together and continually make the songwriting really the focus of it... I think our zone is somewhere between that really hard rock sound but with very interesting chord progressions and kind of weird, special licks that are happening that normal bands wouldn't necessarily try."

More information on Kip's "Get Jack" musical can be found at GetJack.com.