In a surprise presentation ceremony during the taping of "Legends & Lyrics", General Harold Cross honored and praised Kip for his work on "Winger IV".

The flag has historic significance as it was the last United States of America flag to fly over Forward Operating Base, Kalsu, located in Iskandaria, Iraq, 20 miles south of Baghdad. Before it was turned over to the Iraqis, FOB Kalsu was the U.S. Army soldier's broadband Internet services facility in Iraq as well as a base to stop enemy activity in the Sunni Triangle.

"Winger IV"'s (Shrapnel Records) concept and emphasis was on our military and what it was like to be solider, form a soldiers perspective, leaving politics at the door. Kip had a vision to support the American troops that are standing ground in Iraq and elsewhere. "I had been doing solo shows at military bases and in speaking with many of the soldiers, their stories touched me," explains Kip. "It was amazing to hear how far-reaching our music was and how many soldiers have been moved by it. I was truly humbled by the stories."

The album artwork was handled by Ethan Van Sciver who wanted to put in his part for our military. Sciver is a renowned DC Comics book artist and penciler who has contributed (among others) to Cyberfrog, new X-Men, The Flash: Iron Heights and Impulse. The "Guardian Of Freedom" album art depicts our military's finest protecting with guardian angels that are representative of our prayers we send.

Kip is currently promoting his latest solo CD, "From The Moon To The Sun", on MVD Audio, and the soon-to-be-released "Blackwood Creek" record. He recently completed his first orchestral piece for ballet choreographer Christopher Wheeldon, director of Morphoses Ballet Co., that will be used for San Francisco Ballet. The musical world premier of "Ghosts" will be with the Tucson Symphony on November 14 and 15. Kip and Reb Beach have also just begun writing material for a new WINGER release. 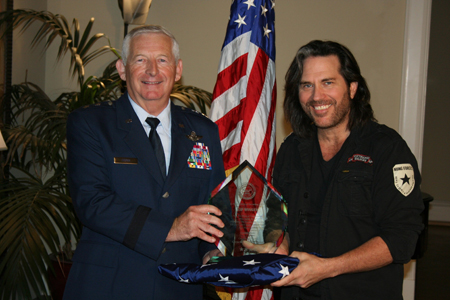